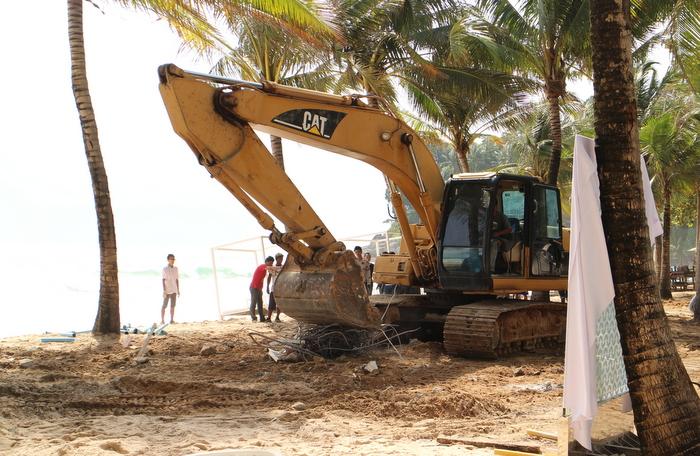 PHUKET: What was once arguably Phuket’s most famous stretch of beach clubs will be demolished by New Year, vowed Phuket Vice Governor Chokdee Amornwat today.

“It will take about two weeks to clear all the buildings and broken construction materials from Surin Beach boardwalk,” explained Vice Governor Chokdee. “This needs to be clearly explained to the English-speaking community impacted so that they understand that what we are doing is returning the beach to its former, natural beauty – a gift to the world for New Years.”

Only one man’s signature is preventing the government from establishing a start date for the demolition of Bimi Beach Club, Catch Beach Club and a number of other iconic establishments.

Watcharin Patomwattanapong, acting chief of the Phuket Provincial Administration Organization (PPAO), is required to sign off on the destruction of a number of buildings which are owned by the PPAO and were leased out to locals, who then allowed private businesses to operate at the facilities.

Mr Watcharin is expected to return to Phuket this week, confirmed a PPAO representative who declined to be named.

“I do not have the authority to say yes or no with regards to the demolition of those buildings. I will report the meeting minutes as soon as he returns,” said the representative.

V/Gov Chokdee vowed to follow up with Mr Watcharin to ensure that the demolition was made a priority.

The beach clubs, as well as the restaurants and other businesses on the east side of the Surin beachfront path are occupying units originally built by the government. However, many of the units had been modified, while other structures unassociated with them had been built.

Post-tsunami, the Cherng Talay Tambon Administration Organization (OrBorTor) established 10 buildings on public park land next to the beach, each with two units, while the PPAO constructed 16 buildings paid for by the Overseas Economic Cooperation Fund of Japan.

“Demolishing all the buildings along Surin Beach is not that easy. Some of them are government property. We need to talk about it and bring other government departments into the conversation,” Phuket Governor Chamroen Tipayapongtada said last year while still acting as vice governor.

“We need to see what needs to be done in order to do everything legally. We need to follow the law and examine leases and contracts.

“Part of that will be looking at who was originally given the non-transferable permission to use the buildings, and who is currently using them under what conditions.”

Despite some of the buildings being legal and some of the modifications made to them being sanctioned by the local government, OrBorTor President Ma-ann Samran remains firm in his desire to see them demolished.

“I admit that we were the ones who gave them permission to modify the buildings, to make them beautiful and to maintain them,” Mr Ma-ann said.

“I feel sorry for the people who used to have their businesses on the land, but the situation has changed. I believe that they have earned enough to just move on now.”

The only exceptions to the demolition orders will be a public stadium and a building that was built in honor of a visit by HM King Bhumibol Adulyadej in 1959.

Mr Ma-ann assured the Phuket Gazette that if he is able to have the area cleared, no new structures would be allowed to be built there.

At a meeting about the Surin Beach businesses today, Mr Ma-ann called for military backing when it came time to start the demolition. The move was quickly approved by V/Gov Chokdee and confirmed by Lt Sompop Kamkana of the Royal Thai Navy.

“I already have a team of 40 officers ready do be dispatched with backing from the National Council for Peace and Order (NCPO),” Lt Sompop told the Gazette. “I would expect Provincial Police and civil volunteers to be present as well, so no less than 200 men to ensure that the work goes smoothly.”

“We have to follow through. We have come this far. If we do not get rid of those buildings, our job in implementing Phuket’s beach management policies will not be finished,” said V/Gov Chokdee.