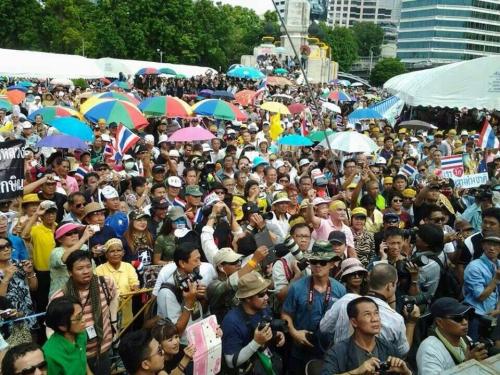 PHUKET: The Phuket contingent of Pitak Siam supporters who joined the anti-government rally in Bangkok will head back home today.

The protest was held to rally against the amnesty bill proposed by the Pheu Thai Party, which was introduced to Parliament yesterday (story here).

The police, empowered by the Internal Security Act, threatened to take action if the crowd did not disperse.

The Democrat leaders elected to stop the protest, instead of risking confrontation, Pitak Siam Phuket co-ordinator Apharat Chartchutikumjorn explained to the Phuket Gazette.

However, the Democrat MP for Surat Thani, Suthep Thaugsuban, vowed “we will continue to fight against the government.”

“He told the Democrat supporters at the rally to return home for now, and to wait and see what happens next before they decide what action will be taken,” Ms Apharat said.

Only one Krabi musician faces the music for American’s murder