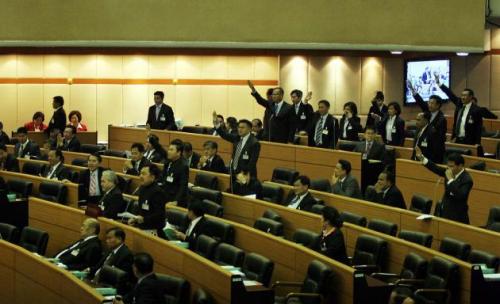 
Parliament begins amnesty bill process
The Nation / Phuket Gazette
PHUKET: The controversial amnesty bill cruised through the initial parliamentary process last night when the House voted 301-160 against a proposal by opposition and Democrat leader Abhisit Vejjajiva to postpone deliberations on the bill. Last night’s vote kick-started a process for the first reading that is certain to be hotly debated and see an increase in political tensions.

The vote followed a long intermission and closing statements from the two sides, made by Abhisit himself and Pheu Thai MP Sunai Chulpongsatorn. The Pheu Thai-led government, which pushed for the bill, and the opposition had spent almost five hours debating other issues and engaging in related protests, which were seen as a tactic by the opposition to waste time.

After the vote, Democrat MP and opposition whip chief Jurin Laksanawisit made a final attempt to halt the process by making a plea to Prime Minister Yingluck Shinawatra – who was absent throughout yesterday’s session – to withdraw the bill, citing political tensions.

The Democrats yesterday tried to shoot down the amnesty bill proposed by Pheu Thai MP Worachai Hema during the House meeting, claiming the bill was a financial law that needed the prime minister’s prior endorsement.

Democrat leaders started the anti-amnesty bill campaign in the morning with a march by thousands of supporters to Parliament. But the supporters had to go home after police refused to allow them inside the zone around Parliament covered by the Internal Security Act.

In Parliament, there were protests from the Democrats before and after Worachai successfully proposed and read his bill to the House.

Democrat Party and opposition leader Abhisit Vejjajiva and his MPs told the floor that Worachai’s bill is a financial law that needs the prime minister’s endorsement prior to deliberation.

“The content is about demanding compensation and allocating a budget to pay for rebuilding the burned buildings [during the protest]. Any bill that imposes a financial obligation on the government needs the PM’s endorsement,” he said.

Article 143 of the current Constitution states that in case of doubt as to whether a bill is a financial bill which requires the endorsement of the prime mMinister or not, it shall be the power of a joint sitting of the House Speaker and President of the all standing committees to make a decision thereon.

So, if there is doubt whether any bill is a financial law, the House Speaker needs to call a meeting of 35 chairmen of House committees to decide, Abhisit pointed out.

Abhisit also asked House Speaker Somsak Kiatsuranont to explain why he made different decisions on the amnesty bill and a reconciliation bill proposed by Sonthi Boonyaratglin. Somsak had once decided that the Sonthi bill was a financial law and had called a meeting of 35 committee chairmen to decide. “If the process is not legal it could lead to legal trouble. And we will ask for a judicial review for sure,” Abhisit said.

Somsak said some MPs, including himself, had doubts about the Sonthi bill hence he had called the meeting.

“But I and the bill’s sponsor have no doubt about Worachai’s amnesty bill,” he said.

The Democrats and the ruling Pheu Thai MPs also locked horns over technical issues. While the Democrats claimed that anyone can raise an issue over whether a law is a financial law, Pheu Thai argued that it was a right reserved for only the House speaker or a bill’s sponsor. MPs from the Pheu Thai camp also insisted that the bill is not a financial law.

Democrat MP Atavit Suwannapakdee said last October a court had ordered convicted arsonists who torched the Udon Thani City Hall to pay for the damage. If the amnesty bill was passed, who would take responsibility for the compensation, he asked.

After three hours of debate, Abhisit proposed that the amnesty bill be postponed to discuss more important issues, including the oil spill, and the meeting agreed to vote for it. A 10-minute intermission was ordered before the vote, two-thirds for the postponement, to be agreed on, as of press time.

Earlier, Somsak had to order a break during Worachai’s reading of the bill to the House. Before Worachai read the bill, a Democrat MP from Yala, Prasert Pongsuwansiri, suggested that the House postpone the State Audit Bill, which was passed by a vetting committee and placed on the agenda for its second reading, ahead of the amnesty bill. But Worachai continued to read his proposal. After that some Democrat MPs shouted in protest so Somsak ordered the break.

Before the House deliberated the amnesty bills, the House took around one hour to protest against Somsak. MPs from the Democrat Party raised their concerns about the obstruction at the entrance to Parliament as some of their assistants were barred from entering the venue.


Democrats pleased with symbolic rally
The Nation / Phuket Gazette
PHUKET: The Democrats are happy with their symbolic anti-government challenge yesterday, although the rally was dispersed before noon, a Democrat source said.

According to a key Democrat member, the opposition party had accomplished its goal with a symbolic fight against the amnesty bill, confirming the number of supporters and alerting the community to keep a close eye on the deliberations.

Thousands of Democrat supporters who accompanied the MPs in the rally against the amnesty bill were told to go home yesterday after police refused to allow them into the Internal Security Act-imposed area near Parliament House.

They were blocked near the Rajavithi intersection and informed that anti-government protesters were not allowed to march to Parliament with Democrat MPs.

Democrat leaders, including Abhisit Vejjajiva, Chuan Leekpai and Suthep Thaugsuban, yesterday morning led thousands of protesters from the rally site near the Urupong intersection to Parliament to protest against the amnesty bill.

Former Democrat secretary-general Suthep Thaugsuban told them this was not the final round. The Democrats had vowed to keep on fighting the amnesty bill and would step up activities when the bill was passed on the third reading.

He told supporters to look forward to the next “Reveal the Truth” rally.

“Now people can see how the government is trying very hard to block us when our supporters just want to send us off to Parliament. They now realise [the situation] and the pressure will increase. When the bill is passed on the third reading, the pressure will make them more than ready to fight,” the source, a key person in the Democrats’ “Reveal the Truth” rally but did not want to be named, said.

He said the idea to lead supporters to Parliament came in a meeting of the party’s strategic team last week and was developed over the weekend.

“A key message that we have kept in mind is that, ‘whatever the Democrats do today [yesterday], will be recorded in history.’ Therefore, we cannot allow any violence,” he said. He added there was an informal agreement that protesters from the People’s Army to Overthrow the Thaksin Regime, who have been rallying at Lumpini Park, should not join them.