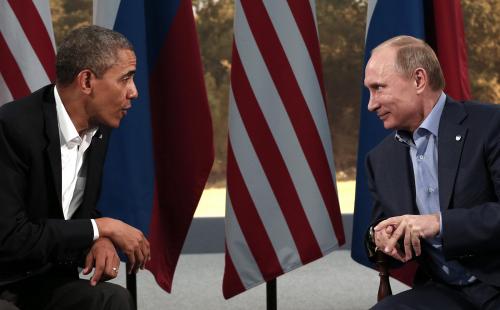 The White House, in a statement, said it valued “achievements made” between Russia and the United States, but cited a “lack of progress” on a host of other issues “such as missile defence and arms control, trade and commercial relations, global security issues, and human rights and civil society.”

“Russia’s disappointing decision to grant Edward Snowden temporary asylum was also a factor that we considered in assessing the current state of our bilateral relationship,” the statements said.

Obama plans to add a stop in Sweden as part of this travels to the G20 summit in early September, a White House official said.

On Tuesday, Obama confirmed that he would go to Russia this fall for a G20 summit in St. Petersburg, Russia, but said he was “disappointed” with Moscow’s decision on Snowden.

“The President clearly made the right decision. President Putin is acting like a school-yard bully and doesn’t deserve the respect a bilateral summit would have accorded him,” the New York Democrat said in a statement.

Authorities said they will on Thursday begin preparing the airport’s domestic terminal, which escaped the blaze, for handling international flights, using tents to create extra space. Domestic flights and outward bound cargo flights were due to resume on Wednesday evening.

The raging blaze engulfed the terminal buildings and lit up the early morning sky, sending billowing clouds of black smoke rising in a plume that was visible from miles away.

The intense heat repeatedly drove back firefighters who battled for five hours to put out the fire, the worst on record at Jomo Kenyatta International Airport, east Africa’s busiest.

The devastating fire coincided with the 15th anniversary of a twin attack by Islamist militants on the United States embassy in Nairobi and Dar es Salaam, the commercial capital of neighbouring Tanzania. But there was no immediate evidence that the attack was linked to any militant groups.

Michael Kamau, cabinet secretary for transport said an investigation into the fire would start immediately but that it was too early to speculate on the cause.

Authorities said they had beefed up security at the airport and key installations in east Africa’s biggest economy.

The blaze stranded thousands of passengers at the airport and exporters of perishable produce, mainly flowers, feared for their export-driven business, a leading source of foreign currency earnings for Kenya alongside tea exports and tourism.

The fire was also a blow to Kenya right at the start of the peak tourism season, a key sector for the Kenyan economy.

Mahmud Jan Mohamed, the managing director of Kenyan hotel operator TPS Serena, said it was a little early to tell the full impact of the disruption to tourism.

“The first half of the year for Kenya was tough but we had an excellent July and bookings up to October are at very buoyant levels so the last thing we need is this,” he said.

There were no immediate reports of casualties from the fire, which started in the arrivals and immigration area. Business travellers and tourists were diverted to other airports.

Shares in Kenya Airways, which uses the airport as its hub, fell as much as 2 percent, before recovering.

The airline said its overnight flights from London and Bangkok would land as scheduled in Nairobi on Thursday morning, the first overseas flights at the airport since the fire.

Preparations to accommodate more international flights would be carried out on Thursday, said Transport secretary Kamau.

“From tomorrow we will be preparing this unit … as an international terminal for departures and arrivals,” Kamau told reporters. “We started pitching tents on the airside for handling departing passengers.”

Inside the gutted building, neat lines of metal trolleys with melted plastic handles were the only clear reminder that the building – whose roof partially collapsed – was once an airport terminal.

Some travellers searched for their luggage amid the charred ruins while staff from Western embassies waved their national flags to attract passengers looking for a place to stay.

“We are now here illegally since we don’t have a visa and therefore can’t leave the airport,” said Juan Cabrera, a French United Nations worker travelling to Zanzibar from Burundi with his wife and baby.

“I’m just wondering how I get back home or continue our trip. No one seems to know.”

Security analysts said there was as yet no indication of any link to Islamist militants that Kenyan soldiers are battling in neighbouring Somalia as part of an African Union force.

“It doesn’t bear the hallmarks of an al Shabaab operation but one never knows. It might be something new,” said a regional security analyst, speaking on condition of anonymity.

Some tourists to the world famous Masai Mara Game Reserve where the annual wildebeest migration is taking place were stranded and had cancelled their bookings, tour operators said.

International flights were diverted to Kenya’s port city of Mombasa. Plans were under way to divert other flights to Eldoret in the northwest and Kisumu in the west, as well as to neighbouring countries including Uganda, Tanzania and Rwanda.

Passengers faced bus trips of hundreds of miles to reach the Kenyan capital.


Italy takes in stranded migrants after Malta refuses
Reuters / Phuket Gazette
PHUKET: Italy on Wednesday allowed 102 migrants who were stranded on a tanker in the Mediterranean to disembark on the Sicilian coast after Malta refused them entry for three days despite European Union calls for it to help on humanitarian grounds.

The migrants, mainly from north Africa, were rescued from a boat 24 miles (39 km) off the Libyan coast on Sunday by the Liberian-registered tanker Salamis. The tanker then headed for Malta but was refused entry to Maltese water by the government.