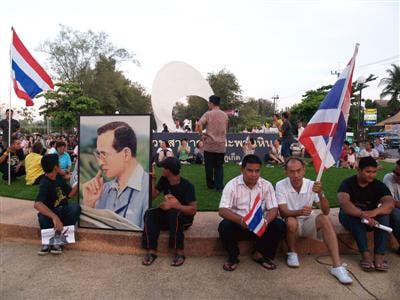 The PPN is a group of Phuket residents who claim to be neither ‘red’ nor ‘yellow’, but are deeply committed to democratic rule with the Thai Monarch as head of state.

Members have been holding daily rallies at Saphan Hin since submitting a letter to Phuket Governor Wichai Phraisa-ngop on Monday.

The petition urged PM Abhisit to resist the red-shirts’ demands to dissolve parliament.

Some 500 people attended yesterday’s gathering from 6pm to 10pm at the Mining Monument. Participants also held group discussions about the ongoing protests in Bangkok.

The daily rallies are set to continue and climax on April 28, the same day a large ‘multi-colored shirt’ rally by affiliated groups is planned in the capital.

Organizers expect a large turnout on Wednesday, which is also the wedding anniversary of HM King Bhumibol Adulyadej and HM Queen Sirikit.

Those gathered will hold a candle lighting ceremony in their honor.