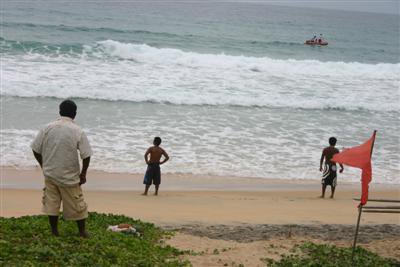 PHUKET: Lifeguards will be back on Phuket beaches from Monday, after the Phuket Lifeguard Club signed a 10-million baht contract with the Phuket Provincial Administration Organization (PPAO) to provide services earlier this week.

The club aims to cut in half the number of drownings recorded at Phuket beaches last year, he said.

The 10-month contract will see 83 beach guards serving Phuket beaches until February next year. They will be on duty from 9am to 7pm daily at 13 beaches.

For the locations, see our previous story.

Mr Prathaiyut said each beach would be assigned a team leader so that all guards would be supervised and know who to report to.

“Our staff are ready to work,” he said. “We will have a standard uniform with ID for all guards. The tourists will see this and we hope they will have more respect when our staff try to give them suggestions or warnings.”

Many tourists, mostly foreigners, have died on Phuket beaches over the years after ignoring lifeguard warnings about dangerous surf conditions, including riptides.

The lifeguards will get new equipment to save swimmers who get into trouble.

“We’re happy with all the equipment we have now and we plan to rent eight jet-skis, the cost of which is included in the budget,” he said.

The guards will try to prevent tourists from entering the surf in dangerous areas, he said. He cited Karon Beach, Patong Beach from Loma Park to Laem Phet and parts of Kata and Surin Beaches as particularly treacherous.

The club has invited staff from Surf Life Saving Australia to train its members and provide volunteers for Phuket beaches.

The club is planning to produce a manual called How to Swim Safely in Phuket for distribution to tourists.

Any qualified instructors wanting to volunteer to train Phuket Lifeguard Club staff or even serve as a guard themselves can contact Mr Prathaiyut by calling 081-892-5549 or emailing ilifeguard@gmail.com.

Phuket a super-star for hotel performance