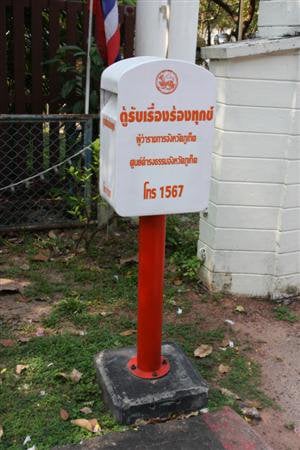 PHUKET CITY: The number 101 is a cinch to remember for those who have read George Orwell’s grim parable of totalitarianism Nineteen Eighty-Four or taken a freshman college class.

Whether this fact figured in Phuket Governor Wichai Phraisa-ngop’s thinking when he launched PO Box 101 – an address any Phuket resident can use to inform the governor, anonymously, of crimes in their neighborhood – is unclear.

Still, Gov Wichai says PO Box 101 has been a success since its launch on April 27.

“PO Box 101 is great,” he said. “I’ve had lots of people send me letters. They send me full descriptions of drug operations and other crimes. They even draw me maps.”

The governor said a PO Box 101 tip-off resulted in the arrest of a man he described as “the chief ya bah dealer in Phuket”.

Gov Wichai was referring to the arrest of three Thai men on May 19 found in possession of 4,670 ya bah (methamphetamine) tablets.

The governor claims to read every letter himself. As well as drugs, Gov Wichai said he had received letters about land encroachment and the conduct of government officers.

The idea is not new. Gov Wichai employed the very same scheme in Phang Nga and Singburi when he was governor of those provinces.

A post box already stands outside the Governor’s Mansion on Narisorn Road, a legacy of the previous governor, Dr Preecha Ruangjan.

Members of the public can drop letters into the box by hand.

A team of officials at the Damrongtham Center at Phuket Provincial Hall process all of those complaints to the governor.

But Gov Wichai’s PO Box 101 scheme makes it easier still for the Phuket public to inform on those they believe are acting illegally – or perhaps those they want to slander.

“People don’t have to write their name on the letter. Just write to me about the issue. After we check and confirm what you say is true, we’ll arrest the perpetrators,” Gov Wichai said.

Anyone wishing to inform Gov Wichai of a crime should write to Provincial Governor of Phuket, PO Box 101, Phuket City, 83000.

Bt20m for tourism improvements in Rassada