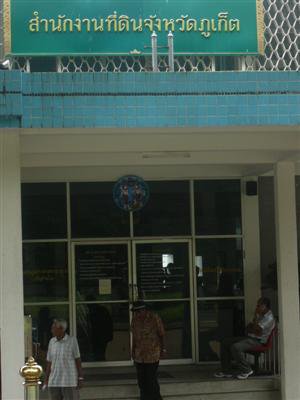 PHUKET CITY: The director general of the Land Department has reiterated that foreigners using Thai nominees to buy land anywhere in the country will have their land title deeds revoked if caught – even if the nominee in question is a lawfully wedded spouse.

Land Department Director Anuwat Meteewiboonwut made the comments during a recent stop in Phuket as part of a nationwide inspection tour of 30 provinces.

The tour is aimed at improving public services by land officials in three areas: dress, conduct when dealing with the public and working harder to eliminate a backlog of work.

Many members of the public have complained that it takes up to a year to complete a transaction that should only take one day, he said.

Mr Anuwat, a former governor of both Phang Nga and Samut Prakan provinces, said he was satisfied on the first two points, but rated the general level of success among land officials nationwide at speeding up their work rate at “only 30%”.

The next round of inspection tours will come in July, after which time personnel changes will be considered if service does not improve, he said.

“We have to keep pressure on them, otherwise the work will not get done,” he said.

As for foreigners seeking to buy homes in Phuket, they can do so through the Condominium Act, which allows foreign ownership of under half of the total area of any project, he said.

Foreigners cannot use a Thai spouse as a nominee to buy property in Thailand, however.

“If the Thai spouse has enough money to buy the house that is fine, but if the Thai has no money and uses money given to him or her by a foreigner to acquire property, that is against the law. If we check and find out later that a Thai person has been using money from a foreigner to buy land anywhere in Thailand, we will revoke title deeds,” he said.

Mr Anuwat said the provisions of [Ministry of Interior] ministerial order 43 makes it difficult to issue land documents quickly, as it requires action from a number of different agencies. Desire for land on the island has also led to encroachment problems here, he said.

As a key market for property companies, Phuket is a constant source of problems and complaints to the director general’s office, he admitted.

“We will try to resolve these problems and develop our personnel continuously in order to provide high quality services. Fortunately the governor of Phuket used to work in the Land Department, so he understands the procedures and can help co-ordinate all the agencies involved,” he said.

Mr Anuwat was speaking of Phuket Governor Wichai Phraisa-ngop, who served as Land Office director in Nakhon Pathom in 1997 and as deputy director of the Land Department nationwide in 2003.