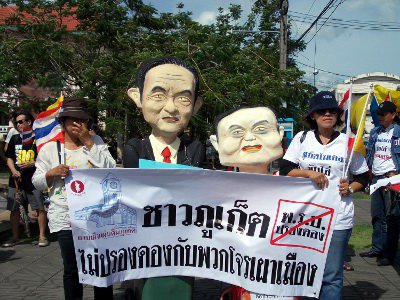 Rallying at Queen Sirikit Park in Phuket Town on Saturday morning, the PAD members demanded that red-shirt supporters stop interfering in the recent Constitution Court order to prevent a third reading of the controversial reconciliation bills.

The court order to halt the readings came in the wake of PAD members from across the country rallying in Bangkok and preventing MPs from entering Parliament earlier this month.

“We want red-shirt supporters to stop interfering with the Constitutional Court,” said Lertpong Tansowat a member of Phuket PAD.

Mr Lertpong listed several more demands of the PAD, which included putting an end to the push for passing the reconciliation bills, stopping moves to amend Section 112 of the Constitution (which embodies the controversial lese majeste laws) and stopping the establishment of “Red Shirt Villages” in Phuket.