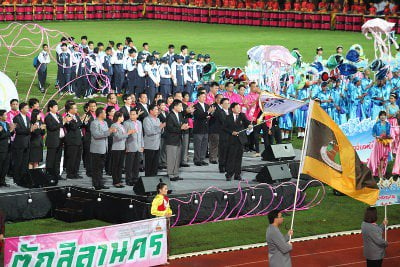 Thousands turned out to brave the wind and rain, which somehow miraculously mostly missed the venue, allowing the onlookers and performers to enjoy the event.

Bringing cheers from the crowd was the closing performance of the event – a mini-concert by Jaruwat “Dome” Cheawaram, nicknamed “Dome the Star” after winning series eight of the nationally televised singing contest The Star.

Phuket athletes raked in an impressive 60 medals. These include 18 gold, 16 silver and 26 bronze. As rankings were determined Olympic-style by the number of golds, Phuket finished in seventh place according to the official tally.

However, in terms of relative finishing position, Thailand’s largest island, and second smallest province by area (Samut Songkhram being the smallest), Phuket topped the table – by far, with an average of five gold medals for each 100,000 persons of its registered resident population (353,847 as of December 31, 2011).

Also worth mentioning, neighboring Southern province Ranong, being the least populous province in the entire country, yet raking in seven gold medals, came in second in the Gazette‘s per-capita calculations (For a full list, see this week’s hard copy of the Phuket Gazette out this weekend).

The 29th Youth Games are scheduled to take place in Maha Sarakham province on March 18-29 next year.

“We have prepared many of the facilities such as hotel rooms, apartments, dorms and resorts for the athletes. Added to that, traveling to Maha Sarakham is easy by road, train or plane,” said Maha Sarakham Vice Governor Suthinan Bunmi, who was in Phuket to attend the closing ceremony.

“For the security, we have arranged for over 3,000 police and Civil Defense volunteers to be on duty over the period.” he added.