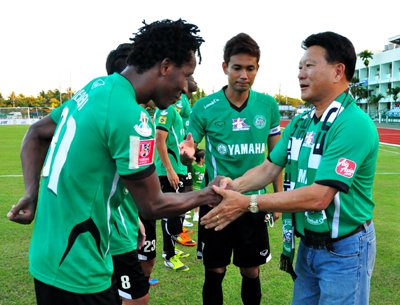 PHUKET: FC Phuket has finally been laid to rest and will from hereon be known as Phuket FC – the Islander.

Club executives announced the news before the start of a league cup match in Sa Kaeo province on Saturday.

Marking the climax of a suspenseful roller-coaster year in which the club was overshadowed by looming financial uncertainty, the change, effective immediately, will also be seen on the team logo.

While the image of the Southern Sea Kirin is expected to remain, the words “Phuket FC The Islander” will replace “FC Phuket Football Club 1688” on the bottom of the logo.

Recently appointed club president Pamuke Achariyachai said, “We changed the name because we want the club to take on a new dimension. The Islander is an ideal name because Phuket is the only club in the Thai league to be based on an island. We are ready to move forward.”

Phuket’s “fresh start” was complemented by a victory in their league match, highlighted by a 34th minute header by Ibrahim Kanoute, redirecting a cross from Niran Phanthong into the net.

The match’s sole goal was enough to ensure Phuket advanced to the next round of the national tournament.

With the Sa Kaeo match behind them, Phuket continue on the road to Chonburi province, where they are set to resume league play in a mid-week match against Royal Navy FC.

Currently 10th in the 18-team Division One league, Royal Navy were relegated from the Thai Premier League at the end of last season, but have so far proved worthy Division One contenders, with three wins, six draws and four losses.

With a single win, six draws and also four losses, Phuket dwindle in 16th place but have vowed to not lose any of their final six matches in the first leg of the season.

Fans who want to see if Phuket can live up to such a goal can see Wednesday’s match, which will be broadcast live at the Nok Sanarm fan club coffee shop across the street from Surakul Stadium.

Kickoff will be at 7pm.

These will be followed by an away match against PTT Rayong on July 18, after which Phuket will return to play Songkhla FC at home on July 22.

All home matches are to be played at Surakul Stadium and will kickoff at 6:30pm.