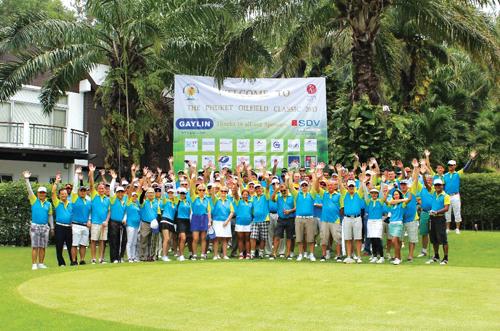 PHUKET: THE 5th annual Phuket Oilfield Classic (POC) charity golf tournament attracted more than 130 oil and gas executives from around the world, who gathered on the island earlier this month for four days of golf and entertainment (click here for final results table).

After the welcome cocktail party on April 4, teams of four enjoyed a great first day out at the Loch Palm Golf Club in the “team Texas scramble”.

Following an evening of fun in Patong, the players reconvened the next day with the “individual stableford competition” at the Red Mountain Golf Club (see results below).

Mark Cameron from organizers, Asian Golf Events, said: “I am really delighted with the turnout this year and as a result of the success of this event, we intend to introduce a Bangkok event and then look for opportunities to expand the franchise across other oil and gas centers around the region.”

Various fund raising activities were held in conjunction with this event to raise much needed funds for the completion of the Good Shepherd School for children of migrant workers on the island.

The event itself raised about 400,000 baht in cash for the charity, but one of the sponsors, Mike Loggie from Saltire Energy pledged to underwrite whatever funding was required to complete the project.

His contribution is estimated to be at about 1.7 million baht.

David Pettigrew, director of Asian Golf Events said: “We were overwhelmed by the generosity of all participants and in particular the amazing gesture by Mike Loggie to step in and provide the funds to complete the project.”

The POC sprang from the interest of 18 avid golfers, many of whom are involved in the oil and gas industry in one way or another, and who came to Phuket to host the inaugural event on November 14, 2008.

Such was the enjoyment and enthusiasm shared among the companies, especially in regards to the fantastic golf courses played, that it was decided to make the event a yearly affair, and invite many other like-minded oilfield industry golfers.

The rest is history, as the POC has grown to become a regular golfing calendar fixture for the island, country and region.

POC aims to support underprivileged children’s charities and organizations on the island, and over the last three years – not including this year – has raised over 1.2mn baht for deserving causes.

Its current charitable focus, the Good Shepherd Learning Center, was set up in late 2010 near Rasada Pier.

Initially, there were no tables or chairs, just a black board and a committed teacher who looked over about 20 children, varying from two to 14-years-old – none of whom had previously received any schooling. There are now 60 children taking classes and more on the waiting list.

The project’s objective is to provide a learning center to teach Burmese, Thai and English education to the migrant children living in Phuket, so that eventually they can make the transition into the Thai education system.

The next event in the series will be the Bangkok Oilfield Classic, August 10, this year.

The dates for the Phuket Oilfield Classic 2014 are set from April 3 to 6.

For more information about the Phuket Oilfield Classic, visit asiangolfevents.com; for more about the Good Shepard School, see: theschoolphuket.weebly.com.

The Phuket Oilfield Classic was proudly sponsored by the Phuket Gazette, PGTV and the nationally televised ‘Phuket Today‘ show on True Visions.

London Marathon is on