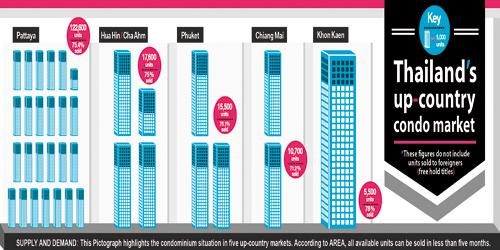 PHUKET: The head of the Agency for Real Estate Affairs Company Limited (AREA), has rejected reports that Thailand’s key up-country condominium markets are currently being oversupplied.

The markets in question include Phuket, Chiang Mai, Pattaya, Khon Kaen as well as the Gulf of Thailand coastline stretch between Hua Hin and Cha-am.

AREA President, Dr Sopon Pornchokchai, PhD, said that such reports, which warned of a bubble, were not based on any truth and thus market speculators and observers need not be swayed.

Dr Sopon supposes that such speculation is being fueled by existing developers who intend to scare new developers from entering the market.

He said that there are two factors suggesting that sales are on the up: the fact that on average, only one in four of all units available are still on the market; and that the time it will take for remaining units to be off the market (sold) is short.

Summarizing the current market situation in Phuket, he said that there are a total of 15,500 units with a total value of about 34.6 billion baht.

“Our research shows that 75% of these have already been sold. These have a combined value of 23.7bn baht, and the monthly turn- over [of new units] in Phuket is about 1,630 units.

“Moreover, [we estimate that] the time it will take for the remaining units to be off the market is only 2.3 months. This shows that the sales outlook is good and thus the situation is not worrisome,” he said.

The monthly sales rate there is about 2,010 units per month, meaning it should only take about 1.5 months to sell all remaining units.

The leading market, in terms of sheer market size, is Pattaya, which has a total of 122,600 units worth a total of 321bn baht.

With a monthly turnover of 5,850 units, Dr Sopon estimated that the remaining units will be off the market in just 5.2 months.

As for Khon Kaen, in the heart of Thailand’s Northeast region, he said there are 5,500 units there worth 8.95bn baht, of which 78% of the units (worth 6.8bn baht) have been sold. With a monthly turn over of 1,500 units, it will take just under a month to sell off the rest, he said.

Then, Dr Sopon highlighted the Kingdom’s second largest condominium market area outside of Bangkok, encompassing the beach-front stretch of coastline from the city of Cha-ahm in Phetchaburi province, to Hua Hin in Prachuap Khiri Kan province.

“Sales have been good because the country’s economy is up and thus residents in various regions, whether [based] up-country or out of Bangkok, in addition to some segments of foreigners, have purchased these units.”

Dr Sopon reiterated that there should be no worries of a property bubble, but what should be cause for concern is banks issuing mortgage loans near, at, or even more than 100% of the condominiums’ value, which he said will make the banks and financial institutions vulnerable.

Also, he said that another practice to be careful about is when developers accept down payments without offering any kind of guarantee to clients.

Dr Sopon noted that Thai-land’s Escrow Act of 2551 (2008 CE) doesn’t require a contract be drafted specifically about the down payment, and that since it was up to the parties whether they wanted to be bound by contract, that most developers didn’t offer such a contract, and instead used their reputation or track record in place of such a guarantee.

He pointed out that many developers barely survived the last financial crisis and left much of the burden on buyers.

By not having any enforced protection on down payment agreements, smaller developers (who hadn’t yet established a reputation) found it difficult to compete with larger developers, he explained.

But more importantly, Dr Sopon said that the lack of mandatory protection increased risk for buyers, particularly in the event that a project fell through.

Dr Sopon concluded that if there were mandatory fair regulations enforced among all developers, it would make all developers focus on developing and improving their brand, and buyers would be more confident in buying, and thus eliminate the risk of projects getting abandoned.

He urged the government to make down payment protection guarantees mandatory between contract parties, and not leave it up to the will of developers.

No cooling measures needed in BKK