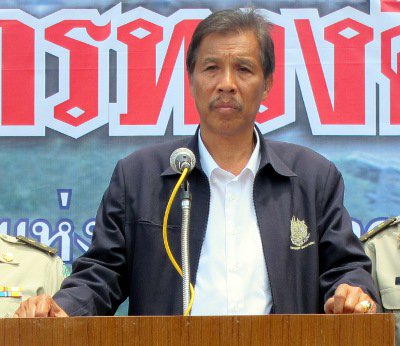 PHUKET: National Parks, Wildlife and Plant Conservation Department (DNP) Director-General Damrong Phidet yesterday announced that the chief of Sirinath National Park will be transferred from Phuket after less than a month in office.

“The Sirinath National Park Chief will be transferred to work at the DNP [offices] in Bangkok for 30 days,” said Mr Damrong.

He went on to explain that Sirinath National Park Chief Opart Nuanmungsor would be “better suited for work elsewhere”.

However, Park Chief Opart told the Phuket Gazette today that he had yet to receive official notice of the transfer.

“Once I get the official order to be transferred, I won’t question it. I can accept that it is due to me being more suitable for work in Bangkok,” he told the Gazette.

“I took up my position here on August 8. I have been working in Phuket for less than a month, so I have yet to really learn about the area,” he said.

Before being transferred to Phuket earlier this month Mr Opart was chief of Khao Lam Pee-Hat Tai Muang National Park in Phang Nga.

“I do my best; it doesn’t matter where I work, as long as I am protecting the nation’s land,” he said.

Mr Opart is the second Sirinart National Park chief to be immediately transferred by Mr Damrong within five weeks. The first was Jirapol Amkham, who was transferred on July 13.

Mr Damrong did not announce who will take up the hot seat as chief of Sirirnath Marine National Park.