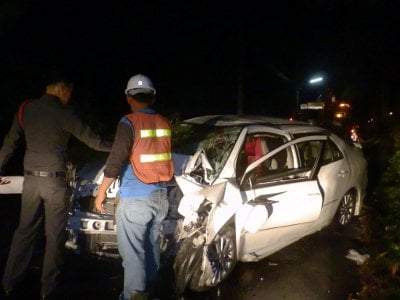 PHUKET: Two men lucky to be alive are recovering at Vachira Phuket Hospital in Phuket Town after the car they were travelling in slammed into a power pole in Cherng Talay about midnight last night.

Arriving at the scene, on Pasak-Koktanod Road, police and Phuket Kusoldharm Rescue Foundation rescue workers found a white Toyota Vios with extensive damage to its front end caused by a high-speed impact with a concrete utility post.

Two casualties were pulled from the wreck: Somboon Khonthai, 27, from Cherng Talay, who suffered minor injuries; and another man who suffered severe facial and head injuries.

Lt Col Sarit Bootnongsaeng told the Gazette that police believe that the driver had fallen asleep at the wheel.

It was not reported who was driving the vehicle at the time, or if either of them was a wearing seat belt.

Rescue workers took both injured men to Vachira Phuket Hospital and the vehicle was transported to Cherng Talay Police Station.

When contacted by the Gazette, staff at Vachira Hospital declined to give any information concerning the health of Mr Somboon or the other crash victim.