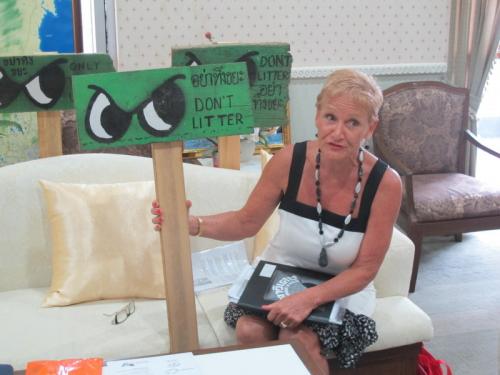 PHUKET: A series of cleanup events are to sweep the island this September as Phuket gears up to celebrate “Clean Up the World” as part of the relaunch of the Phuket Magic Eyes Organization.

The Phuket Provincial Administration Organization (PPAO) is joining hands with the Phuket Magic Eyes Organization and the Society Environmental Economy Knowledge (SEEK) group to take part in one of the largest community-based environmental campaigns in the world.

“Our campaign aims to encourage people in Phuket to take care of the environment. We will all work together across the island,” said Phuket Vice Governor Sommai Prijasilpa, who chaired a meeting about the event yesterday.

The event will see cleanups throughout the island fall in sync with cleanups around the globe from September 20 to September 23.

The cleanup schedule is:

– September 20, starting at 9am at Saphan Hin in Phuket Town

– September 20 to 23 at Patong Municipality and Sri Panwa Hotel

– September 21 at 9am at the PPAO Office; at Baan Laem Tukkae on Koh Sireh; Karon Beach; Kata Beach

The cleanup is being used to relaunch the Phuket Magic Eye campaign that originally took a foothold on the island in 2001, Managing Director of SEEK Nick Anthony told the Phuket Gazette.

Phuket Magic Eyes was originally organized to tackle the issue of litter on the island. The project will be relaunched with the same goal.

After gaining the support of the local government, Mrs Mierczak was able to have anti-littering signs posted and rubbish bins installed, said Mr Anthony.

“Within five days of putting up signs and placing bins, the area was spotless. And it has stayed that way,” he said.

“I was playing ‘spot the plastic’ from Surin to Phuket Town and saw almost nothing. They are doing a very good job with roadside litter management,” he said.

Mr Anthony pointed out that the local government was able to tackle the issue due to the health concerns presented by plastic bags, which can trap rain water.

Those wanting to get involved in next weekend’s cleanup can contact Mr Anthony of SEEK at 089-873 2042.