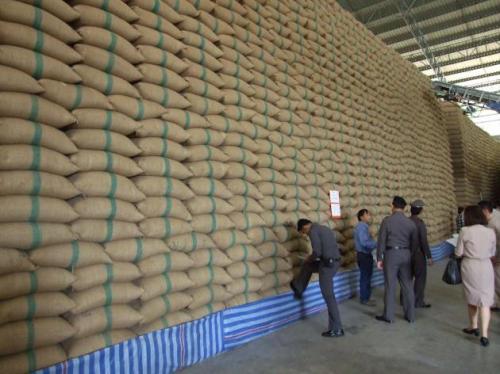 Fears rice scheme will break budget
The Nation / Phuket Gazette
PHUKET: The Finance Ministry’s sub-committee assessing the cost of the rice-pledging scheme plans to finalise figures for the first year of operations next week, with or without the latest information on inventories, a ministry source said yesterday.

The panel chaired by deputy permanent secretary Supa Piyajitti is rushing its report, as the scheme is entering its third year and there are concerns over inconclusive results from the first two years.

Indeed, there are fears that the scheme’s expenditures, which have reached Bt700 billion, could spiral out of control and threaten plans to run a balanced budget by 2017.

The report has been delayed for months as the Commerce Ministry has asked for more time to submit the latest data on remaining stocks and the quantity of rice released.

“As the Commerce Ministry could not yet trace all stockpiles, the committee will need to conclude our report with the available information,” said the official, who asked not to be named. All unaccounted for stocks will be deducted, based on the average price of rice sold by the ministry, the source said.

The Commerce Ministry earlier informed the committee that 2.9 million tonnes of rice was missing from granaries. However, after inspection by police and other agencies, the figure could rise to 3.9 million tonnes.

The Cabinet recently approved a Bt270 billion pledging budget for the 2013/14 harvest year. However, under the government’s vow to practice fiscal discipline, by the end of this year it is committed to lower outstanding spending under this scheme from Bt700 billion to Bt500 billion by disposing of rice stocks.

Churarat Sutheethorn, head of the Public Debt Management Office, said the Bank for Agriculture and Agricultural Cooperatives, which is in charge of implementation, had not yet put a fund-raising plan to the office.

“Bringing down the scheme’s outstanding expenditure to Bt500 billion at the end of this year is set to balance the budget in 2017. If this can’t be done, we may not achieve the target,” she said.

Under new Commerce Minister Niwatthumrong Boonsongpaisan, the ministry is accelerating stock releases. Two weeks ago, after returning from China, he said Chinese state enterprises had agreed to place orders for 1.2 million tonnes of Thai rice.

The pledging scheme raised the government stockpiles to about 15 million tonnes, and given the high pledging price of Bt15,000 per tonne against a lower market rate, it may be difficult to unload stocks, even at a loss.

In July, 5-per-cent broken milled white rice from Thailand was quoted internationally at $538.26 per tonne on average or Bt16,148. The price included all freight costs.

“If the government can do this, I believe that the scheme would be more transparent,” he said, calling for details on the G2G rice deal with China.

Niwatthumrong announced earlier this month that China’s state enterprises would place orders for 1.2 million tonnes of white rice from Thailand.

Ongart said some rice traders were profiting from the deals, with rice prices quoted below market rates. Once selling the rice, they benefited from the difference.

He said bosses of some warehouses used to stock the rice were also benefiting.

He promised further probes and said if any irregularities were found, the Democrat Party would submit a petition to the National Anti-Corruption Commission.
.
Taxi cameras being mulled
The Nation / Phuket Gazette
PHUKET: All taxis may need to be equipped with closed-circuit cameras for the safety of passengers and to prevent drivers from rejecting passengers, Transport Minister Chadchart Sittipunt said.

The camera would be used like an aircraft’s flight-recorder when crimes or other incidents take place inside a cab, he said. “The footage in the cameras could be used as evidence to prove allegations against taxi drivers, like the ‘blackbox’ in a plane.”

In addition, the equipment would help discourage the driver from refusing to pick up passengers. Many potential passengers had complained about being turned down by taxi drivers who claimed they were about to beat the deadline to return their rented cabs, or they did not know the destination.

Chadchart said if the measure proved effective, all vehicles in future may be required by law to have the equipment to monitor and protect passengers.

Land Transport Department deputy director-general Asdsathai Rattanadilok Na Phuket said new regulations to take legal action against cab drivers who refuse to carry passengers are expected to be announced within three months. The maximum penalty would be the revoking of the taxi licence of that cab or it would not be renewed. In such a case, the taxi will no longer be able to ply the streets.

“We must pay attention to the content of the WEF’s findings. Our standing is getting worse. We have seen Thailand’s scores sliding down the scale in all categories survey after survey, year after year. This is a serious matter that calls for a national strategy to reverse the trend,” he said.

Thai education has been in a crisis state for a while now and efforts to bring about reform have not borne fruit due to political interference and bureaucratic resistance, he said.

“We talk a lot about teaching our students to be critical, to think independently and to solve problems, not use rote learning and memorisation. But we are getting nowhere.

“English could be an answer to our educational malaise. With a higher proficiency in English, Thai students can change the dynamics of the classroom. They will have access to more information before going to class, forcing teachers to be better prepared and turning traditional lecture rooms into seminars where active exchanges can take place,” he said.

In the current sad state of Thai education, teachers have little motivation to prepare their lessons and students have no tools to access information relevant to their courses due to their universally low fluency in English.

English must be an urgent national agenda item. A high percentage of Thai students, even at secondary school level, already carry smartphones.

“But they are IT-savvy only for digital games. And not to access useful information for learning and intelle