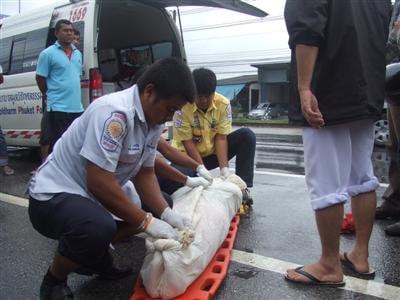 PHUKET: A young woman employed by the Phuket Land Office died when her motorbike was struck from behind by a pickup on Thepkrasattri road in Thalang this morning.

Witnesses told police the victim, 24-year-old Wattana Jamchat, was riding her motorbike along Thepkrasattri Road northbound near the new PTT service station in Srisoonthorn subdistrict when she was struck from behind by a black Toyota Vigo pickup.

The force of the impact threw Ms Wattana from the bike. She died of an apparent broken spine and other injuries when she hit another pickup parked on the roadside.

No safety helmet was found at the scene, rescue workers said.

Police took the driver of the Vigo, a young Thai man, to Thalang Police Station for questioning.

Friends said Ms Wattana was on her way to work at the Land Office in Thalang as usual at the time of the accident.

Kusoldharm Foundation workers took the body to Thalang Hospital for examination and storage until claimed by relatives.

The rush-hour accident caused long traffic tailbacks on both sides of Thepkrasattri Road, the main north-south artery through Thalang.