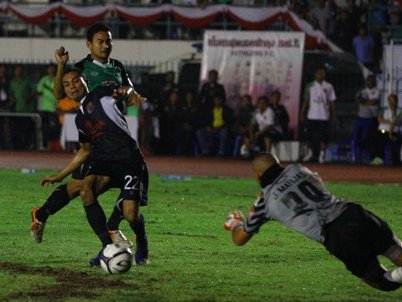 Phuket’s loss to Pattalung last week from a solitary goal means that Phuket will need to win by two goals tonight if they are to advance in the tournament.

If Phuket manage to get an edge with a one goal to nil score at the end of normal time, the match will continue to extra time, and then to penalties if no more goals are scored.

If Phuket come on top 2 – 1, Pattalung will still advance due to the away goals rule for two-game aggregates.

Tonight’s winner will go on to play in the semifinals against either Chiang Rai United, or the Toyota League Cup 2010 champions, Thai Port FC – whom will be be battling for advancement at Thai Port’s home ground, PAT Stadium in Bangkok, also tonight at 7pm.

The other semifinal places will be determined next month with Buriram PEA, BEC Tero, Muang Thong United and Chonburi FC finalizing their second leg matches mid-September, with dates still to be announced. The final is currently scheduled for October 15.

The Southern Sea Kirin have endured a demanding road campaign having played seven consecutive away games including three cup and four league matches.

Phuket’s last game at home was on July 6 when they held premiere league side, Sri Racha FC to a 1 – 1 draw in the last 16-stage of the Toyota League Cup.

A large and lively crowd is expected to turn out to tonight’s all-southern hi-stakes match.

Spectators are advised to bring an umbrella as heavy rain is forecast.