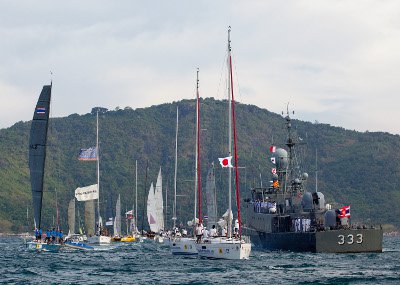 PHUKET: The entire Phuket King’s Cup Regatta fleet took part in an inspiring sail pass close to Nai Harn Bay yesterday, before the start of the third day of racing.

Royal Thai Navy yachts led the procession of Regatta boats from around the world, as they sailed past three Royal Thai Navy ships positioned off Nai Harn Bay.

This spectacular tribute was held in honor of His Majesty the King of Thailand’s 85th birthday.

Thousands of spectators, media and members of the public also gathered on Phromthep Cape viewpoint to watch the sail pass and gun salute, followed by a procession of the Royal Thai Navy ships, paying their respects and showing their love and support of Thailand’s Monarch, himself a gold medal winning sailor.

The boats were crewed by an international complement of sailors from 34 countries; part of the reason why the Regatta is renowned as the region’s most coveted sailing competition.

The sail pass was followed by some very competitive racing in 15+ knots of wind with gusts of up to 20 knots.

In the IRC Zero class, Frank Pong and his Jelik team turned it up a gear, winning races six and seven ahead of the Royal Malaysian Navy DK47 skippered by Mohamad Razali Mansor, and Kevin Whitcraft’s all Thai team on the modified GP42 Won Marang.

“Phuket has been terrific and has really delivered. This is a much older boat than the one we ran last year, so it is carrying less handicap. With the previous setup it was very sticky in light air below eight knots. It was okay today [Wednesday] with the changes I’ve made; it goes well in all conditions. Conditions will change of course; Friday looks lighter, Saturday, very light. We ran from 12-20 knots today [Wednesday] and it worked well – 42 seconds and 20 seconds ahead. We have only really sailed against Kevin’s Won Marang. We hope the Regatta President Commodore does well, and we hope they finish second!”

David Fuller’s Ichi Ban, one of two competing Ichi Ban teams this year, took a spectacularly tight win in the IRC1 class, just one second on corrected time ahead of Walawala 2 team skippered by Steve Manning. The bottleneck finish illustrated just how close the class is this year, with potential winners coming from anywhere on the results sheet. In race seven, Foxy Lady 6, skippered by Bill Bremner, came home in first place. The class remains wide open.

Royal Thai Navy 1 secured two victories in the IRC2 class. Skipper CPO.1 Wiwat Poonpat inspired his crew to power home almost half a minute ahead of Matt Allen’s Ichi Ban team – very tough competitors in each and every race.

Fantasia, skippered by Andrew Stransky, returned to winning form in the Multihull class with a win in race six, while a new victor emerged in race seven, Sweet Chariot skippered by Mark Thornborrow.

In Platu One Design class, Junichi Ishikawa and The Beaver came in ahead of compatriot teams Sakura and IPPAI, leaving Scott Duncanson’s Thai-registered Tuay Lek at the back of the pack. The second race honors also went to The Beaver, establishing their dominance in the one-design class.

In the Premier class, Richard Dobbs’ Titania of Cowes won again in both races, solidifying his lead and putting him in good stead for back-to-back Regatta wins following their success last year. The Pine-Pacific team, Dobbs’ nearest rival in terms of outright pace, came in second place in race four, and in race five, a small time difference separated them from team Xena. Dobbs has the points score advantage, but margins of victory remain tight on corrected times.

Of the Bareboat Charter entries, Aussie Graeme Sheldon became the man to break the Russian dominance in the class with a strong win by him and his Agility International team. Mikhail Beloborodov on Tonicola 2 placed second, with compatriot Kirill Sakhattzev finishing third. However, Sakhattzev’s Sail Plane team came on strong in the next race, placing first for an important win.

Barry Cunningham took Patrice III and crew to a Modern Classic class victory in both races against some very stiff competition from Emerald Blue and Windstar; just a couple of minutes separated all three boats on corrected time.

In Cruising Class, William Lo’s No Name romped home in first, seemingly without a challenge. This is doubtless the boat to beat among this group of cruising yachts. The team was victorious in race five also, setting the crew up for a solid Phuket King’s Cup Regatta trophy come end of the week.

The final races for the windsurfers took place yesterday. Re-introduced to the Regatta this year, windsurfing has certainly added some adrenalin-fueled excitement to the proceedings.

Chun Leung Michael Cheng took the overall win. Thai windsurfing stars Natthaphong Phonoppharat and Pornanan Payungkasem did their best to overturn the Hong Kong Olympian, but Cheng was ultimately victorious after a display of great windsurfing. His compatriot, Hei Man Chan, was the overall winner in the women’s class.

The International Dinghy Classes also concluded with Thai sailors winning across the board. Pongsapat Poomyam won the Optimist Boys, while Kamonchanook Klahan was the Optimist Girls winner. Laser victory went to Kamolwan Chanyim, while Akapoj Kankaew finished first in the Topper contest.

The first three days have so far delivered spectacular tropical sailing conditions, and with two days to go, there is still plenty to compete for. Thursday is a Lay Day. Racing returns on Friday December 7.