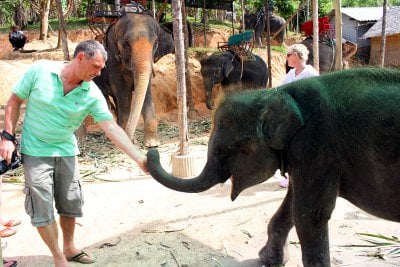 PHUKET: The management at Laguna Resorts & Hotels, which operates the five-hotel resort complex on Phuket’s west coast, have issued a statement about the baby elephant “Joey”, which was seized in raids in Phuket in February.

“We’re very pleased the authorities have resolved the question of Joey’s parentage through DNA testing, but obviously disappointed he won’t be able to return here to his former role as a popular and much-loved member of our Laguna Phuket family.

“Joey was acquired by us in good faith after we carried out exhaustive due diligence, receiving written confirmations he was legally registered and obtained through necessary regulations.

“Now that has been proven not to be the case, we hope the authorities will continue to use DNA testing to thoroughly investigate the legality of elephants.

“The well being and welfare of our elephants at Laguna Phuket’s Elephant Camp is paramount to us. The camp has been inspected and approved by Richard Lair, chief adviser to the Thai Elephant Conservation Centre.”

Of the two other baby elephants seized in Phuket in February, the infant pachyderm seized from the Phu Thai Souvenir Market in Chalong was identified by the DNA test results to be the offspring of a legally registered mother at a camp in Saiyoke Elephant Park in Kanchanaburi.

“The young elephant will be returned to the Phu Thai owners,” Col Watcharin Phusit, Superintendent of the Regional Natural Resources and Environment Crime Suppression Division, confirmed to the Phuket Gazette.

However, the DNA test results from the baby elephant seized from the ATV@Hill Adventure Tour camp, on the road to the Big Buddha image in Chalong, showed otherwise.

“The baby will not be sent back to the ATV camp, but reunited with its mother instead,” he said.