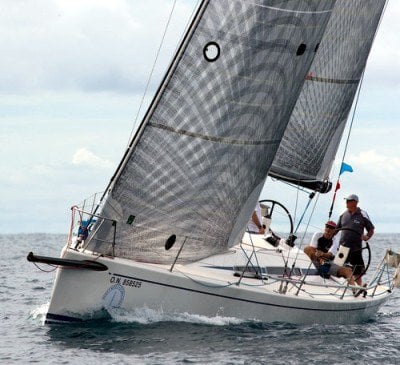 The Evolution crew have so far secured four wins from five races.

With three races left in the regatta, the outstanding performance of Robert’s’ crew leaves a daunting challenge for defending Racing class champ HiFi, who are currently on nine points.

“We are a bit disappointed with the long race. We were doing well and I guess the mistake was we didn’t cover Evolution,” Pryde said.

“He went inshore which we thought was the wrong thing to do. We went straight down towards the islands and he just lifted right up inside in totally different wind. There was nothing we could do about it. That was the race,” he added.

In IRC 1, Matt Allen on Ichi Ban continues to dominate the class with five points.

Phuket’s own Ben Copley on Katsu scored a win and a third-place finish today to move into second place overall with 13 points.

A win in today’s second race moved Team Sea Bees into second place overall in the class with an aggregate of five points.

Brent Morgan’s Men at Work are third overall in the class with eight points.

For the rest of the latest provisional results from today’s racing, click here.

Phuket Gazette poll: Will the Patong Tunnel ever see daylight?