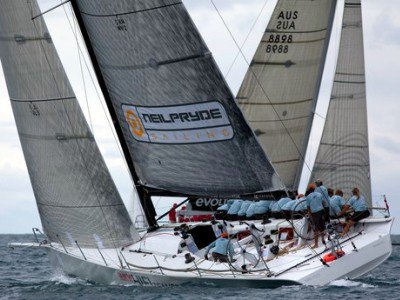 PHUKET: Stiff breeze offshore made for good yacht racing today, day two of the Phuket King’s Cup Regatta 2010, with Ray Roberts’ Evolution Racing extending their lead in the Racing class by one point.

Arch rival Neil Pryde and his crew on HiFi drew first blood yesterday, winning the regatta’s opening race, but Evolution fought back from their disappointing fourth-place finish in the first race to score two firsts yesterday.

The Evolution crew were not deterred by today’s course around nearby islands, which was much longer than yesterday’s relatively short windward-leeward courses.

Although finishing second in today’s race, HiFi are still in the running for the cup and are second overall in the class with five points – two points behind Evolution with four races to go.

In IRC 1, Matt Allen on Ichi Ban continues to lead the class with four points.

Yasuo Nanamori and his crew on Babe are second overall on eight points, but only after discarding today’s 16th place finish.

Phuket’s own Ben Copley on Katsu rallied to win today’s IRC 1 race and now are placed third overall in the class with 10 points.

Action in the IRC 2 class is hotting up with the top four crews within four points of each other.

Team Sea Bees, formerly raced as Madame Butterfly with Peter Dyer at the helm, this time are racing with Jamie Watts as skipper. They are third overall with four points.

Yet, all eyes are on Royal Thai Navy 2, who are fourth overall in the class with six points. The entire fleet knows the Navy sailors will not miss out on a podium finish without a fight, and there are just four races left to go in the class.

Fergus Wilmer and Henry Kaye, who has raced in every King’s Cup Regatta, are second overall with three points on their catamaran Thor.

David Liddell, racing on the famed and fast Miss Saigon, is third overall in the class with five points

Regatta racers will descend upon Mom Tri’s Boathouse at Kata Beach for tonight’s party, hosted by Siam Winery and The Boathouse.

All results are provisional at the time of going to press. For full results see kingscup.com