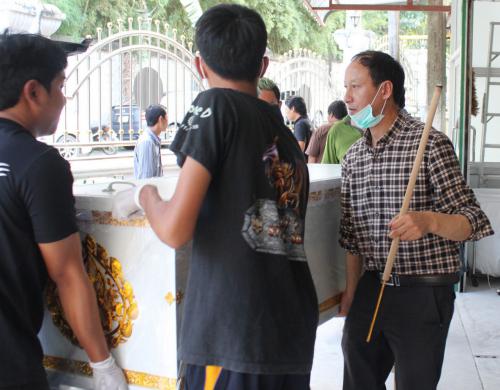 PHUKET: The father of Gao Yang underwent the heart-wrenching process of identifying his son’s body today.

The 20-year-old Chinese national Gao Yang slipped from the rocks at Promthep Cape and fell into the sea at the iconic promontory last Wednesday. His body was recovered after it was spotted by a passing speedboat on Friday (story here).

“We can confirm that they have positively identified the body as that of Gao Yang,” Qin Jian, Vice Consul of the Consulate-General of the People’s Republic of China, told the Phuket Gazette today.

A staffer at Vachira Phuket Hospital told the Gazette that the procedure of identifying the young man’s body was highly emotional.

“Mr Gao and a group of relatives from China arrived at the hospital this morning. They were all crying deeply when they saw the body,” the staffer said.

Chinese consulate staff in Songkla confirmed to the Gazette that Gao Yang’s remains will be cremated during a small ceremony at Wat Ketho in Kathu this evening.

“After the ceremony, the family will return to Zhejiang, south of Shanghai, with Mr Gao’s ashes,” the consulate staff confirmed.

Mr Gao and three friends, all Chinese nationals who are studying in Singapore, arrived in Phuket on holiday last week. He fell into the water while posing for a photo at Phuket’s southernmost tip.

“We have a few warning signs in the area, but that is not enough to let tourists know about the danger of falling from the rocks,” Governor Maitri said.

“We will post more warning signs on the way down to the cape. The signs will be in English, Thai and Chinese,” he said.

Governor Maitri did not support the idea of fencing off the area or installing railings on the rocks.

“That might greatly affect the natural beauty of the area, which is why tourists visit this location,” he explained.

“We will order the local municipality, tour companies, tour guides and hotels to warn tourists about the danger of climbing down onto the cape,” he said.

Rawai Deputy Mayor Teerapong Taodaeng confirmed that his office also would not ban tourists from climbing onto the scenic rocks.

“The best thing we can do is warn them of how dangerous the wet rocks can be,” Mr Teerapong said.

“We will install the signs as soon as possible,” he added.