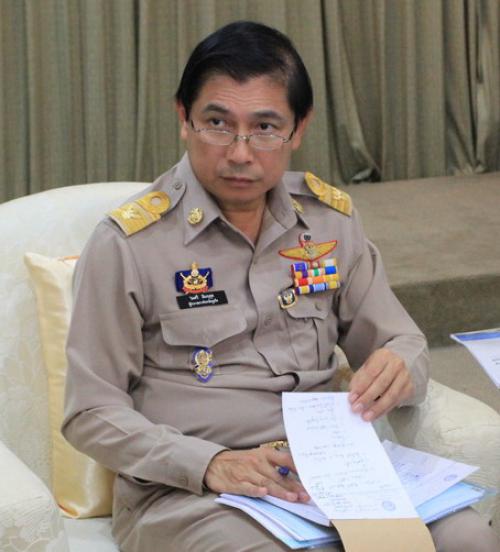 PHUKET: Safer Phuket, a new marine-safety non-government organization (NGO), made a splash today with the announcement of the Coastal Water Safety Summit in January at the PIMEX Boat Show.

The announcement comes in the wake of over 200 tourists being stranded on nearby islands over the weekend due to heavy weather (story here), and fatal rip currents on Phuket’s west-coast beaches continuing to build on their notorious reputation.

“This is going to be a big event for Phuket, as all Phuket authorities, both government and private sector, will come together to brainstorm and coordinate ways to ensure tourist safety at sea and along the waterfront,” Phuket Governor Maitri Inthusut said at the announcement.

“This summit is a great opportunity for us to work along with the UK Embassy,” he added.

The summit, along with other Safer Phuket projects already in motion, has received the full backing of the governor and Phuket Honorary Consul Martin Carpenter.

“There is considerable potential for this initiative and in working together. The British Embassy will continue to provide full support,” UK Ambassador Mark Kent says on the Safer Phuket website (here).

The two-day gathering starting on January 9 will be held at the Royal Phuket Marina.

Government officers and members of the private sector will receive a variety of marine-safety training during the event, said Gov Maitri.

“We will also exchange ideas about what needs to be done to improve marine safety in Phuket,” he added.

For Mr Stewart, the summit heralds “a new beginning in the island’s commitment to improving coastal water safety through significant changes in safety standards and training”.