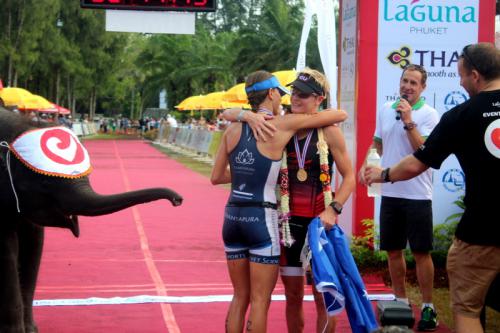 PHUKET: Swiss Olympian Ruedi Wild has triumphed once again at the Laguna Phuket Triathlon, successfully defending his title from his debut performance in the iconic endurance event last year.

In the women’s field, Challenge Laguna Phuket Tri-Fest’s headliner from Australia, Melissa Hauschildt, newly-crowned 2013 ITU Long distance World Championship and 2013 Ironman 70.3 World Champion, who made her LPT debut this year and snatched the title from a top-class field of fellow pros.

Wild was among a chasing pack behind runaway leader, three times LPT Champion Massimo Cigana up until kilometer eight on the run course where the hard-running Wild made a pass on Massimo who never found his run legs today.

“I didn’t think I had a good swim leg but I made up time on the bike and especially the run afterwards,” said Wild “It feels great to have won today. I want to come back next year of course!”

A field of over 1,000 individual pro and age group athletes representing 43 nationalities jumped into the waters of Bang Tao Bay at 6.30am to tackle the 1.8km swim, followed by a 55km bike ride and a 12km run. There were also 75 relay teams taking part amid the event’s renowned carnival atmosphere. This year’s entries once again break previous year’s record.

The top male amateur finisher was Timothy Cosulich of the USA who took ninth position overall with a time of 2:49:37. The first female amateur was Thailand based Frenchwoman Carole Fuchs who finished in 3:09:04 at 49th overall.

The first Thai male finisher was Phuket’s own Jaray Jearanai who finished 13th overall in 2:51:54; and top Thai female finsher was Nampetch Porntharukcharoen of Bangkok at 160th overall in 3:28:10 both defending their top Thai finisher position from 2012.