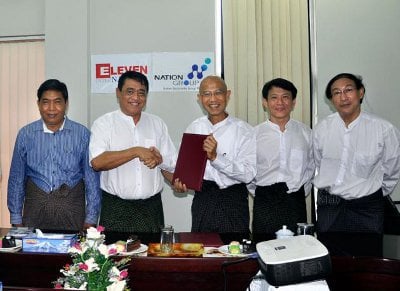 The Memorandum of Understanding (MoU), signed in Yangon last Friday by Nation Multimedia Group chairman Suthichai Yoon and Eleven Media Group chairman and CEO Dr Than Htut Aung, is a precursor to the formation of a joint venture in a wide range of English-language publications in the near future.

Both Suthichai Yoon and Dr Than Htut Aung pledged to combine their editorial and business efforts to benefit the peoples of both countries and the Association of South East Asian Nations (ASEAN) region with high professional standards and ethics.

“The Eleven Media Group is Myanmar’s No 1 private publishing group with a highly impressive record of independent and hard-hitting coverage against corruption and undemocratic activities in Myanmar. I have great respect for Dr Than Htut Aung’s crusade against dictatorship and corruption,” Mr Suthichai said after the signing ceremony.

“This is a landmark agreement with both media organizations sharing similar histories in independent and impartial news reporting, as well as supporting democracy,” said Dr Aung.

Eleven Media publishes the largest-circulation newspaper, operates websites in local and English languages, and is the pioneer and leader in SMS English-language news. Nation Multimedia publishes Thailand’s leading newspaper The Nation, which is also co-founder of the Asia News Network, an alliance of 21 leading newspapers in 18 Asian countries.

Dr Aung founded Eleven Media 11 years ago as a sports weekly. The group has since expanded to general news publishing with an aim of promoting democracy for the people and adhering to a public interest agenda in Myanmar. Eleven Media is also preparing for Myanmar’s further integration into ASEAN and the international arena as the country opens up to more involvement by the international community.

“We share the same mission in freedom of the press, public interest agenda and democracy as well as regional outlook. Nation Multimedia Group and Eleven Media will utilize and optimize existing assets with minimal new investment in our various aspects of close cooperation,” said Mr Suthichai.

Both sides will proceed to form a joint venture for an English-language website as soon as possible and to set up a daily English-language newspaper at an appropriate time. Eleven Media will have a majority in the partnership. The joint venture hopes to be listed as a public company when Myanmar sets up a stock exchange, currently scheduled to open in 2016.

Eleven Media has also entered into a broad professional cooperation with NMG in the areas of editorial staff exchange, training, new media, English-language training and editing. The Nation and Eleven Media local and English-language websites will exchange news on a daily basis.

As a member of NMG, the Phuket Gazette has thus become a cousin of Myanmar’s Eleven Media.

In addition to mutual shareholdings, the Gazette has enjoyed editorial cooperation with NMG since July 2000, and launched last year national distribution of the Phuket newspaper through The Nation, making it by far the largest circulation newspaper in the south of Thailand.