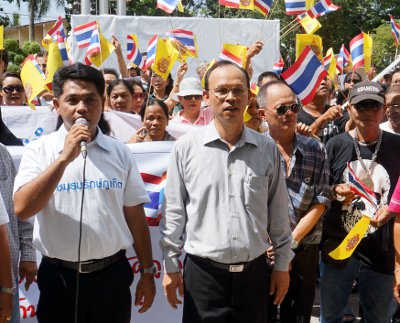 PHUKET: Hundreds of members of the “We Love Phuket Club” arrived at Provincial Hall this morning to submit a letter of complaint against a planned rally by red-shirt activists at Nai Yang Beach on Sunday.

“We Love Phuket Club” President Boonsupaa Tanthai said that the red-shirt rally would be led by Surin Yotharak and Suchart Phetcharat, who are both locals of the Sakoo area, where Nai Yang Beach is located.

He claims the rally aims to inspire local residents to declare their villages as “Red Shirt Villages”.

“According to the National United Front of Democracy Against Dictatorship [UDD], they are organizing political activities across Thailand, including Southern Thailand, to open up ‘Red Shirt Villages’,” Mr Boonsupaa said in his statement to Phuket Vice Governor Somkiet Sangkaosuttirak and the media present.

“After discussions with [some] Phuket residents, we all agreed that the red shirts should not be holding this activity at Nai Yang Beach this Sunday. This activity will definitely cause disharmony in Phuket. Especially as it’s contrary to the government’s reunification policy,” Mr Boonsupaa said.

“Some people who do not agree with the UDD may possibly attack the UDD supporters,” he warned.

“We have just faced a natural disaster [the floods last year] and we’re still in the process of rebuilding tourist confidence in visiting Thailand. If we have another political issue in Phuket it can only do more damage to Phuket’s reputation,” Mr Boonsupaa said.

He also expressed concern that the rally may have a hidden agenda. “We are concerned over what exactly it is that the red shirts really want from opening ‘Red Shirt Villages’ here. Each time they hold an activity, people close to the government attend.

“We doubt that this [rally on Sunday] will have any benefit for the people in general, it is more likely being held just for the benefit of the government,” he said.

In light of the concerns raised, Mr Boonsupaa called for the authorities to be present at the rally on Sunday to safeguard against any conflict.

Vice Governor Somkiet responded by telling the protestors that he would pass their request on to Phuket Governor Tri Augkaradacha.

He also praised the protestors for exercising their democratic rights.

However, he added, “By the rules of democracy, you all have the right to say what you like and dislike. So long as you act with the law, be assured that the authorities will protect you.

“We will show fairness to all sides,” V/Gov Somkiet added.