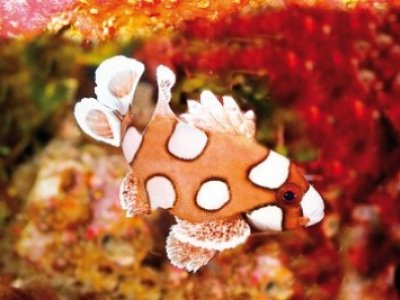 PHUKET: Geared up without letting a tank touch the pavement, four of us waddle across the hot sand of Kata Beach to take a peek at the beautiful and “at high risk” reef-system just offshore.

Only a couple weeks ago Niphon Pongsuwan, a coral expert, warned Phuket that the amount of coastal development on the island would accelerate the sedimentation of coral reef-systems along its coast, citing the northern end of Kata has a high risk zone.

Determined to see the beauty of Kata Reef before it turned into a ghost town or the mudflats of Friendship Beach, I made a last minute booking for a dive with Oceanic Divecenter.

In the water, Martin Ruhoff, an instructor at the center, points out a juvenile harlequin sweetlips vertically dancing with its head down, like a shrimp fish. The little fish squirms and wiggles, its white spots accenting each move.

The reef is a nursery, there is a wide array of stunningly patterned juvenile fish. There is a young emperor angelfish, with the distinctive almost concentric rings of blue and white along its side, even a young yellow boxfish is nestled into the corals.

A reef as close to shore as the one off Kata Beach provides a great deal of protection for young fish, and even juvenile white-tip reef sharks were spotted taking cover in the reef in years past.

However, the closeness to shore and the amount of development on the steep slopes around Kata threatens this nursery reef-system.

Though tropical reef-building corals are not plants, their distribution and growth is highly light-dependent, due to their symbiotic relationship with algae, which is why the sudden increase in sediment in the water is a serious threat.

Coral polyps do catch zooplankton at night, but many of them receive 50 per cent to 95 per cent of their energy through the photosynthetic process, as algae pass on carbon to the corals through sugars. In return the prey caught by the coral polyps supplies the algae with nitrogen, which is essential for their existence.

The effects of sedimentation on Kata Reef is obvious as we kick along its outer edge. Many of the staghorn corals are brown, and vacant.

Though there are some vibrant corals and plenty of scorpion fish and other eye-catching sea-life, there is a rundown feeling to the outskirts of the reef, like an American mining town whose mines have been closed.

Suddenly, our visibility is cut to only a couple meters as fresh sediment becomes suspended in the water. Beyond killing the visibility for our dive this sediment can blanket a reef and “suffocate” it. Not only is the sediment an issue when it settles, but even suspended in the water it causes issues by decrease the amount light that can reach the corals and algae there is a reason that we associate diving beautiful coral reefs with pristine clear water.

Martin leads us away from the edge of the reef, into the more protected middle area. The water instantly clears, it feels like we’re in an aquarium.

A couple trigger fish charged past us and pairs of butterfly fish hid in the coral infrastructure. Relaxing at a depth of seven meters allows us a long dive, plenty of time to poke around the corals and discover nematodes, such as a warty sea slug.

Hiking out of the water it’s thrilling to think about the ease and cheapness of a quick shore dive from Kata. But despite the beauty of the dive, there is a feeling that the reef has fallen from its former glory and that developers are knocking at the coral polyps’ door with an eviction notice.

Phuket Health: The doctor will see you now