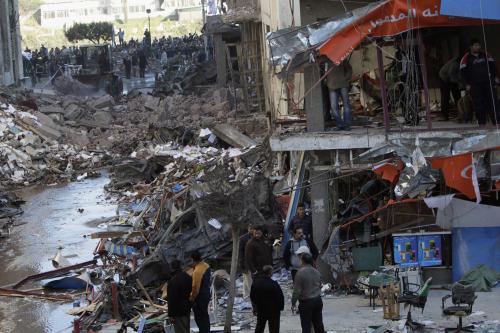 Egypt arrests dozens under anti-terror law, one killed in Cairo
Reuters / Phuket Gazette
PHUKET: Egypt stepped up pressure on the Muslim Brotherhood a day after declaring it a terrorist group, using the new classification to detain dozens of its supporters on Thursday, while one person died in street clashes ignited by political tension.

A bomb blast in a Cairo suburb wounded five people – the second attack this week after a suicide bomber killed 16 people north of the capital on Tuesday. Army chief Abdel Fattah al-Sisi, who led the overthrow of President Mohamed Mursi in July, said Egypt would be “steadfast” in the face of terrorism.

Kerry condemned the bomb attacks but “underscored the need for an inclusive political process across the political spectrum that respects the fundamental human rights of all Egyptians in order to achieve political stability and democratic change,” Psaki said.

The Cairo bomb, which blew windows out of a bus, appeared to be the first aimed at civilians in a recent wave of attacks. But there was no claim of responsibility to say what had been targeted. A second device found nearby was defused.

The government declared Mursi’s Muslim Brotherhood a terrorist group on Wednesday in response to the suicide attack that targeted a police station a day earlier in the city of Mansoura. It accused the group of carrying out the bombing, which the Brotherhood condemned.

The move gives the authorities wider scope to crack down on the movement that propelled Mursi to the presidency 18 months ago but has been driven underground since the army deposed him following mass protests against Brotherhood rule.

Nearly three years after President Hosni Mubarak was toppled in a historic uprising, Egypt stands more dangerously divided than at any point in its modern history, with militant attacks, shootings and arrests undermining hopes for democracy.

Tensions spilled into the streets of Cairo late on Thursday, when student supporters of the Brotherhood clashed with residents of an area where they were demonstrating, the Interior Ministry said. Birdshot gunfire was exchanged and one person died before police fired tear gas into the crowd to disperse protesters, the ministry said in a statement that did not identify the person.

A U.S. official said the Egyptian government was going “way too far” in the crackdown on the Brotherhood, but added that the Obama administration was not planning to take any action against Cairo in response.

The U.S. official said that the administration of President Barack Obama was not considering, or even discussing, the possibility of the U.S. government designating the Muslim Brotherhood as a terrorist organization.

Historically, the U.S. has placed the names of some individuals associated with the Muslim Brotherhood on U.S. government sanctions list, but has not imposed sanctions on the movement itself.

The United States decided in October to withhold some of its annual $1.3 billion in military aid to Egypt, pending progress towards democracy after the overthrow of Mursi, the country’s first freely elected head of state.

The state news agency reported that 16 of the people arrested under the terror law were accused of “promoting the ideology of the Muslim Brotherhood group, distributing its leaflets, and inciting violence against the army and police”.

Security sources gave a country-wide total of at least 38 Brotherhood supporters arrested for belonging to a terrorist group.

From now on, anyone taking part in Brotherhood protests will be jailed for five years, Interior Ministry spokesman Hany Abdel Latif told state TV. Jail terms for those accused under the terror law stretch up to life imprisonment. “The sentence could be death for those who lead this organisation,” he said.

Terrorism charges will also apply to anyone who finances or promotes the group “verbally and in writing”. Publication of the Brotherhood’s newspaper, Freedom and Justice, was halted in response to the decision.

The state has accused the Brotherhood of turning to violence since the army toppled Mursi. Attacks on the security forces have become commonplace, with about 350 soldiers and policemen killed.

The Brotherhood denies using violence, saying the army has mounted a bloody coup and killed hundreds of its supporters.

The government says it will stick to its political transition plan that has timetabled a referendum on a new constitution for mid-January, after which elections will follow.

Sisi is widely tipped to win a presidential election expected next year, assuming he runs.

Some analysts believe the nation of 85 million people faces a protracted period of Islamist militancy, with attacks spreading beyond the restive Sinai Peninsula, the scene of the worst violence against the security forces to date.

The government has yet to make public any evidence to back up the charge that the Brotherhood staged the Mansoura suicide attack. The public prosecutor’s office, which is investigating the bombing, said there would be no comment until its investigation was complete.

The state news agency reported that the security forces had thwarted an attempt to set off a bomb outside a police compound in Kafr el-Sheikh province.

The Interior Ministry said it will secure polling stations for next month’s referendum by deploying secret police, combat units and explosives experts, according to a statement.

It said it would boost security at churches before January 7, when Coptic Christians, who make up about a tenth of the population, celebrate Christmas.

The Interior Ministry has opened three telephone lines for citizens to report suspected terrorist activities, including those by the Brotherhood, an official said.

“The putschists are a terrorist organisation. The Brotherhood are peaceful patriots,” they said in a statement.

In the weeks after Mursi’s removal, the security forces killed hundreds of his supporters while dispersing their protest camps, and arrested thousands more, including most of the Brotherhood’s top leadership.

State prosecutors last week ordered Mursi and others to stand trial on charges including terrorism and conspiring against Egypt. They could face the death penalty.