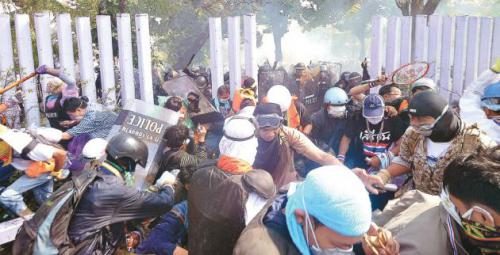 
Police officer killed in clashes with protesters
The Nation / Phuket Gazette
PHUKET: One police officer was killed and at least 96 anti-government protesters and journalists and 28 police officers were injured after violence erupted at the Bangkok Youth Centre (Thai-Japan) aka the Thai-Japanese Stadium yesterday, according to the state emergency medical service agency.

The Public Health Ministry reported yesterday that at least one protester had undergone surgery after being shot in the head.

He lost a lot of blood on the way to the hospital.

Doctors tried to give him artificial respiration but he succumbed.

Pol Maj-General Piya Uthaiyo, the spokesman for the Centre for the Administration of Peace and Order (CAPO), said injured police officers were sent to General Police Hospital after clashes with protesters at the Thai-Japanese Stadium. Police Lance Corporal Thanapol Nopluay, 25, who was shot on his right shoulder during the clashes later underwent surgery.

Police Senior Sgt-Major Preecha Thongpiam, 42, Sgt-Major Tawee Wongchan, 40, were hospitalised after being injured during the tear gas attacks and after unknown objects were thrown at them.

At noon, Piya said two more officers, injured by ping-pong bombs, were still inside the centre.

Saying that the poll numbers draw has been completed, he asked protesters why they were still trying to break into the centre where the draw took place in the morning.

Police resorted to firing tear gas at the protesters at the stadium yesterday morning.

As of 2pm yesterday, the Bangkok Metropolitan Administration (BMA)’s Erawan Emergency Medical Service Centre reported that all the injured people had been sent to seven hospitals in Bangkok.

According to the Public Health Ministry, one of the injured protesters, who was hit by a bullet in the head, underwent brain surgery at Rajvithi hospital. He later was identified as the security guard of the anti-government People’s Democratic Reform Committee. Two other protesters were shot by rubber bullets and suffered after-effects of the tear gas.

At least two local reporters from Thairath TV and ASTV were also injured in the clashes.

A reporter from Thairath TV was affected by the tear gas and a cameraman from ASTV was hit by a rubber bullet. A Japanese reporter was hit by unknown objects on his face.


Local residents affected by tear gas
The Nation / Phuket Gazette
PHUKET: Residents, including children, living near the site where police fired tear gas at anti-government demonstrators trying to interrupt candidacy registration have been badly affected by the gas.

Police started firing tear gas at about 7.20am yesterday after protesters led by the Students and People Network for Thailand’s Reform cut through the padlock of Gate 2 at the Bangkok Youth Centre (Thai-Japan) and tried to storm the compound on Vibhavadi-Rangsit Road.

After the gate was opened, they encountered a police truck blocking their way. Police fired several rounds of tear gas at the protesters, who grabbed some canisters and hurled them back into the compound.

Some protesters were hit by rubber bullets. Residents of the nearby Din Daeng apartments were forced to close their windows and use electric fans to blow tear gas out of their rooms.

Arisa Makkui said her six-month-old daughter was affected by the gas. The girl woke in fright and started crying when the first round of tear gas was fired at the protesters.

“Police should stop firing tear gas, because there are small children and elderly people living in this community,” Arisa said.

Resident Somsri Temtung said her three-month-old baby and four-year-old daughter were also affected by the chemicals. She used an electric fan to blow the smoke out of the room.

She said she wanted to see the fighting end, because residents are suffering. If protesters did not incite police, they wouldn’t use tear gas and residents would be spared, she said.

Neung Romrat said she had to take care of her paralysed aunt and could not leave her apartment at all.

At 1.30am, four suspected gunmen on a pick-up truck opened fire with M16 assault rifles and an 11mm pistol into a two-storey building in Trang province’s Huay Yod district, according to police. Spent ammunition shells were found at the scene. There was no report of casualties.


Grounds for prosecution over charter-change bill, says NACC
The Nation / Phuket Gazette
PHUKET: The National Anti-Corruption Commission announced yesterday there were grounds for pursuing charges against former Parliament president Somsak Kiatsuranont and his deputy Nikom Wiratpanij for their roles in attempts by the government to amend the composition of the Senate, thus violating the Constitution.

NACC member Wicha Mahakun said there was sufficient evidence that the two accused could be deemed to have performed their duties dishonestly, abusing their authority and violating the ethical code.

However, Nikom can still perform his duties as the NACC has yet to decide on whether the two will be indicted. They will be summoned by the commission to acknowledge the charges on January 10.

The ruling, which was announced after the commission’s meeting yesterday, involved six witnesses, documents from the Constitutional Court and Parliament, and evidence submitted by the parties who lodged the complaint, Wicha said.

The agency will conclude on January 7 whether it will file charges against the rest of 381 former MPs and senators, including caretaker Prime Minster Yingluck Shinawatra, who proposed the charter amendment draft.

The court ruled that under the Constitution, the PDRC’s protest rallies were an exercise in freedom of assembly and there were no grounds to suggest they were organised with the intention to overthrow a democratically elected government.

The court also plans to rule on a petition filed by former Democrat MP Wiratana Kalayasiri, which states tha