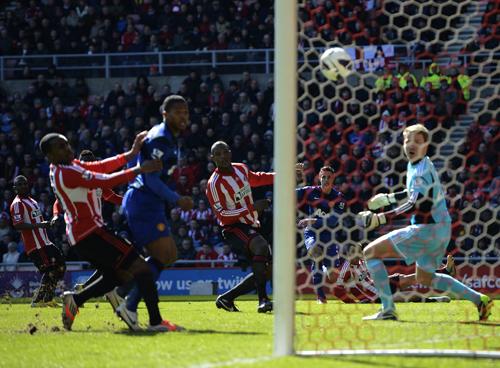 Claudio Pizarro scored four times as Bayern Munich hammered Hamburg SV 9-2 to stand two points away from the Bundesliga title with seven games left and Juventus moved closer to retaining their Serie A crown with a 2-1 win at Inter Milan.

There was no change at the top of La Liga as the top four were all held to draws this weekend, leaving leaders Barcelona 13 points clear of Real Madrid at the top, with nine games left to play.

Lowly Celta Vigo snatched a late equaliser to draw 2-2 at home with Barca, spoiling Lionel Messi’s celebrations after he scored in a record 19th successive league match, completing a run of netting against every side in La Liga consecutively.

Like Barca, Real rested players with a view to next week’s Champions League quarter-final first legs and were also forced to come from behind to draw 1-1 at Real Zaragoza, thanks to a Cristiano Ronaldo strike.

Third-placed Atletico Madrid missed out on the chance to leapfrog Real when they were held 1-1 at home by Valencia, Radamel Falcao netting the equaliser in only the sixth minute.

Manchester United remained 15 points clear at the top of the Premier League with a gritty 1-0 win at struggling Sunderland.

Robin van Persie’s shot deflected into the net off Sunderland defender Titus Bramble to secure United’s 25th victory in 30 games this season and keep them firmly on course for a 20th league title with eight games left.

Champions Manchester City crushed Newcastle United 4-0 to stay second, five points ahead of Tottenham Hotspur, who won 2-1 at Swansea City, and seven clear of Chelsea who slumped to a 2-1 loss at Southampton.

Arsenal, two points further back in fifth, kept up their challenge for a Champions League place with a 4-1 demolition of bottom club Reading.

Sunderland, just a point clear of the relegation zone, reacted to their defeat by sacking manager Martin O’Neill and appointing Paolo Di Canio as head coach, while Wigan Athletic boosted their survival hopes with a 1-0 win over Norwich City.

Juventus took another step towards retaining their Serie A title when they won 2-1 at bitter rivals Inter Milan, keeping them nine points clear of Napoli.

Napoli bravely kept up their challenge by coming from behind to win 5-3 at Torino having trailed 3-2 with 10 minutes left.

Swiss midfielder Blerim Dzemaili levelled in the 80th minute with his third goal of the game and Serie A top scorer Edinson Cavani then added two more. AC Milan’s 1-0 win at Chievo kept them two points behind in third.

They were on the brink of clinching the title until Robert Lewandowski gave second-placed Borussia Dortmund a late 2-1 win at VfB Stuttgart to extend the title race for at least another week.

However, Bayern only need another two points from their last seven games to clinch their 23rd German league title.

At the bottom, hapless Greuther Fuerth remained without a home win in their debut Bundesliga season after losing 3-2 to Eintract Frankfurt.

Paris St Germain warmed up for Tuesday’s Champions League quarter-final first leg against Barcelona with a convincing 1-0 victory at home to champions Montpellier.

PSG are now seven points clear at the top of the Ligue 1 table after Olympique Lyon, who have not won in their last four games, slumped to a shock 2-1 home defeat by lowly Sochaux.

Andre-Pierre Gignac’s 10th league goal of the season was enough for Olympique Marseille to win 1-0 at fellow European hopefuls Nice and leapfrog Lyon into second spot with 54 points.

Lyon have 53 in the third and final Champions League qualifying berth, three more than St Etienne who drew 2-2 at bottom club Troyes.

A double from Viktor Fischer helped Ajax Amsterdam cruise to a 4-1 win at home to NEC Nijmegen as they went three points clear at the top of the Dutch league with six matches remaining.

Ajax have 60 points with PSV second on 57 after they dropped points in a 2-2 draw with Roda JC Kerkrade. Third-placed Vitesse Arnhem, who beat PEC Zwolle 2-1, are level on points with PSV.

High-flying Benfica drilled six past Rio Ave in a comfortable 6-1 home win that kept them four points clear of Porto at the top of the Portuguese Premier League with six rounds to go.

Brazilian striker Lima grabbed a hat-trick as Benfica strolled to a morale-boosting victory ahead of their Europa League quarter-final first leg at home to Newcastle United on Thursday.

Defending champions Porto kept up the chase by overcoming Academica 3-0 away thanks to goals from French centre back Eliaquim Mangala, Brazil right back Danilo and midfielder Castro. Benfica have 64 points from 24 matches with Porto on 60.