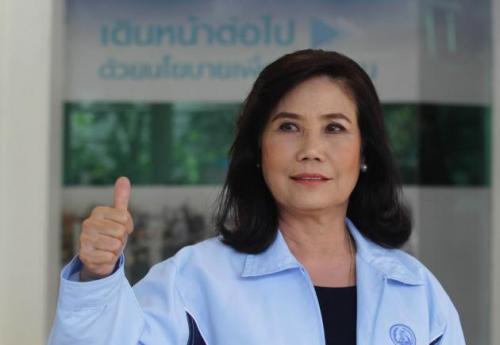 
Govt readies evacuation plan for Thais in South Korea
The Nation / Phuket Gazette
PHUKET: Labour Minister Phadermchai Sasomsap yesterday instructed the Thai ambassador in Seoul to prepare a plan for the speedy evacuation of all Thais after North Korea on Saturday declared it was at a “state of war” with South Korea.

Pyongyang’s announcement came as the communist country escalated its bellicose rhetoric against both South Korea and its staunch ally the United States.

The emergency plan includes the setting up of temporary shelters in places like Busan and the arranging of flights and ships to transport Thais, mostly contract workers, to Japan if hostilities really break out, Phadermchai said.

The labour attache at the embassy was ordered to gather information on the number of Thai workers in the northern part of South Korea.

About 44,000 Thais are in South Korea and 10 Thai employers are in North Korea, Foreign Ministry spokesman Manaswee Srisodaphol said. The spokesman added that the ministry has not yet announced the evacuation plan to avoid panic.

Prime Minister Yingluck Shinawatra has directed the Foreign Ministry to closely monitor the conflict on the Korean Peninsula and to take care of Thais living in South Korea.

Nitipol Chainant, the Democrat director in Chiang Mai, said the party was not intimidated, even though the party candidate was contesting against Pheu Thai Party heavyweight Yaowapa Wongsawat, Thaksin Shinawatra’s younger sister.

“The party will fully back Kingkarn who is a native of Chiang Mai and the Na Chiang Mai family who had built this province to have a chance to serve Chiang Mai people,” he said.

Nitipol said Kasem Nimolrat had resigned as Pheu Thai Party MP to solve the party’s internal problems, inflicting on taxpayers the expense of a by-election.

“This is an insult to the people of Chiang Mai. Besides, the Pheu Thai picks a candidate who has political flaws,” he said. Kingkarn said it was the most difficult political decision she had made but thanked the Democrat Party for its trust and support. She said voters should not think of this election as to who will win or lose, but to uphold democratic principles, which have been distorted.

“Kasem’s resignation is to help a particular person. I have decided to run in this election to call forth people’s awareness of their rights and because I want to see change, love and unity in Chiang Mai,” she said.

Charter showdown looms
The Nation / Phuket Gazette
PHUKET: The political temperature is expected to rise to boiling point today when the opposition and the coalition clash head-on over three bills seeking to amend four provisions of the Constitution.

The opposition Democrat Party has prepared at least 30 MPs to attack the amendment bills which it believes the coalition Pheu Thai Party wants to enact to help just one person – former prime minister Thaksin Shinawatra.

But the Pheu Thai will argue that the amendments are necessary to make the charter more democratic.

The Pheu Thai spokesman said some 60 Pheu Thai MPs would debate in support of the charter amendments. The three bills seek to amend Article 68, Article 190 and Article 237 of the Constitution – as well as require all senators to be elected. Democrat MP Jurin Laksanavisit, the chief opposition whip, held a meeting of opposition whips to prepare for the showdown today.

The Democrats had prepared 30 MPs to inform the public that the charter amendments would not help the people and the country, but would benefit only particular groups, he said.

Elected senators have been wooed to support charter amendments with the promise that all senators would gain office from elections and they would be allowed to contest the elections without having to wait for one term, he added.

Jurin said Democrat MPs would point out that the planned amendments relating to senators’ tenure and origin would run counter to the intentions of the 2007 charter, adding that the the opposition also disagreed with the plan to amend Article 68 to restrict the people’s rights to file a petition in the Constitution Court directly, and instead require them to submit their petitions to the attorney-general.

The Democrats also disagreed with the plan to lift the party dissolution penalties and political bans against party executives by amending Article 237, Jurin said.

But Pheu Thai spokesman Prompong Nopparit said the three charter amendment bills were in the public interest and not aimed at benefiting the Pheu Thai and Thaksin, as alleged.

For example, the amendment to Article 68 was aimed at reducing the workload of the Constitution Court by having the Office of the Attorney-General screen petitions from the people first. Prompong said all Pheu Thai MPs were told to attend the parliamentary meetings in full force from today until Wednesday.

The Pheu Thai spokesman said the coalition expected the three amendment bills would sail through Parliament.

“ThePheu Thai and the coalition partners will support charter amendments to make the charter genuinely democratic and return the power, which was seized in 2006, to the people,” the Pheu Thai spokesman said.

Meanwhile, Abac Poll of Assumption University announced that most people hope to see an end to the political conflict after the charter amendments – but doubt such an optimistic scenario would be possible, according to an opinion survey.

The Abac Poll was carried out the survey among 2,153 people in 17 provinces from March 15 until Saturday. The provinces included Bangkok, Kanchanaburi, Samut Prakan, Chiang Mai, Sakon Nakhon, Buri Ram, Trang and Nakhon Si Thammarat. The respondents were at least 18 years old.