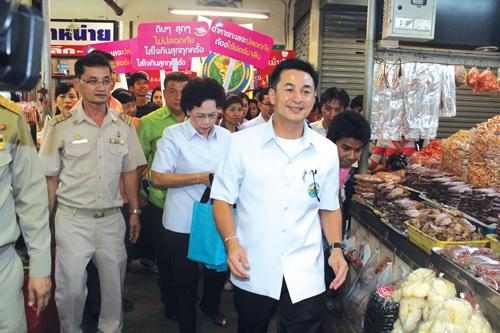 PHUKET: The Deputy Minister of Public Health declared the Baan Saan fresh market in Phuket Town as formaldehyde free, following an inspection tour of the market earlier this week.

The recently opened Baan Saan market is being positioned as a model ‘safe and clean’ fresh market ahead of the Asean Economic Community (AEC).

Deputy Minister of Public Health Cholanan Srikaew, joined by Phuket Governor Maitri Inthusut and Narong Saiwong, deputy chief of the Department of Health, led the inspection tour as a follow up on the Ministry of Health’s campaign to promote food safety confidence among consumers ahead of the AEC. The appraisal of Baan Saan market follows a series of inspections of Phuket market places since last year, which revealed several cases of contaminated produce.

Mr Cholanan affirmed that the government’s policy is to regulate public food safety, with a specific emphasis on the public and tourism sectors.

In preparation and anticipation for the AEC, which is set to come into full effect from 2015, the government has been monitoring and inspecting the threat of chemical contamination of produce sold at local fresh markets.

The campaign is being spear-headed with the slogan “Phuket Seafood Formaldehyde Free”.

“Food safety is very important in creating confidence among Thai and foreign consumers. Phuket is a [popular] tourism destination that generates substantial income for Thailand.

“Of about 10 local fresh markets, Baan Saan market is a bench mark. Consumers can have 100% confidence in the market as it is fully up to standard, maintains good sanitation and has regular chemical and contamination inspections [conducted there].

“Other than this, understanding about food standards is continuously facilitated between officials and food operators here.”

Dr Narong explained that in addition to formaldehyde, the Health Department were also testing for six other contaminates, including insecticide, borax, sodium hydrosulfite, salicylic acid, salbutamol and formalin.

He went on to cite tests from last year in which 526 produce samples were taken from fresh markets, flea markets and supermarkets from throughout Phuket. Out of these, he said that 15, or 2.85% were more contaminated than the allowed limit.

Of these, 10 of the samples came from Mueang district (Phuket Town and Chalong), including insecticide contamination in eight samples of salted fish, chili paste, cabbages, morning glory and egg plants.

Additionally, two samples of the fern/herb known as “sabai naang” (Drynaria quercifolia) were contaminated with formalin.

Honda’s BigWing takes off in Phuket