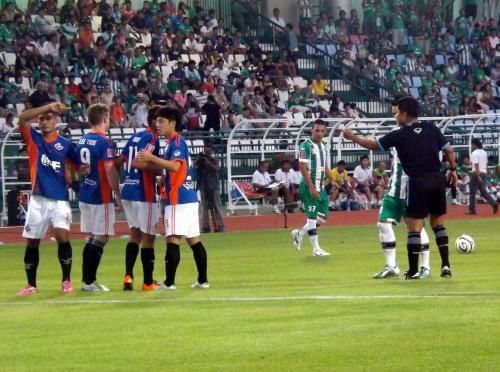 Kritsada Sakaew opened the scoring in the 24th minute for Phuket, beating Bangkok FC’s Cameroonian keeper, Jean-Marc Engoulou Beyeme, at his near post with a free kick just outside the 18 yard box.

The match was evenly poised with both teams spurning a number of chances to take the lead until Phuket FC’s striker Chana Sonwisetm crossed the ball to Luiz “Dudu” Percino who scored on his YL1 home debut for Phuket.

The lead was short lived, as four minutes later Pirawit Litsriboon pounced on a mistake by Phuket’s goal keeper to equalize for Bangkok FC.

The match was watched by 5,400 fans, including about 100 Bangkok FC fans who made the journey from the capital.

Former Phuket FC striker and fan favorite Thawin Butsombat, who was sold to Bangkok FC at the end of last season, was not selected by Bangkok FC as a mark of respect.

The result moved Phuket to 8th place of the 18-team league, while Bangkok moved up to second with four points.

After the match, Bangkok’s striker Lee Tuck said: “It was a hard game tonight. Phuket have many good players…but it was a fair game. They had some chances, and so did we.

“I have to give props to Phuket. They executed their set plays well and our defenders had difficulty retaking possession.”

After two games, Tuck is the second top scorer in the league with three goals.

“We look to improve every year, and I would be very happy if I can get the golden boot award again.”

Tuck trails BBCU’s Pichet In-bang, who scored his side’s goal in last week’s 1-1 draw with Phuket in Bangkok, and also scored a hat trick this weekend against Sri Racha.

Bangkok FC coach Apisit Kaigaew told the Gazette: “I’m satisfied with my team’s performance, we played our systems and we were able to draw some fouls and execute our tactics well. Overall, I’m satisfied with the result.”

Asked what his goal for the season is, Coach Apisit said that he also aims for promotion to the Thai Premier League (by finishing in the top three).

“We have our ambitions, but will need to take it match by match,” he concluded.

“We didn’t get three points. We took the lead twice, and then conceded equalizers both times.

“I have to give credit to Bangkok. They are a very good team, especially their foreign players, who are [playing] in good form.

“We should have closed the game on several opportunities, but made some mistakes. Overall, the players played hard, and we’ll look forward to our next match against Si Racha.”

The match against Suzuki Si Racha FC will be played on Saturday, March 16 at Surakul Stadium.

Kickoff is at 6:30pm. Adult tickets are 100 baht, while small children get in free.

Other YL1 results this weekend: