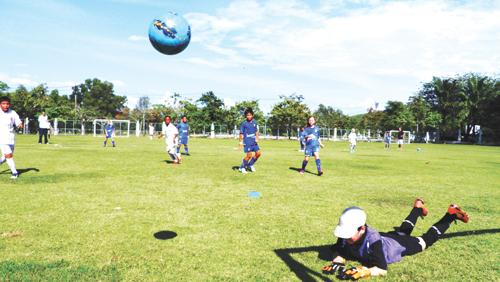 The under-11s were first up and had some exciting matches in store. Spain continued their fine form beating a determined Brazil in their first match and Thailand managed to edge past an improving England side. The second set of matches saw an upset as England beat leaders Spain by a single goal and defended resolutely. Thailand won their second match of the weekend comfortably beating Brazil.

Anucha Kaewman from Youth Football Home, who plays for England under-11s, explains why he enjoys playing in the FPL, “I enjoy the FPL as I get a chance to play with and against my friends.”

The under-14 division was next to grace the BIS fields. Spain managed to beat Thailand Blue in their opening game, with Brazil and Argentina defeating Thailand Green and England respectively.

After a short break, the second round of matches took place with England scoring a last-second goal to beat Thailand Blue in a thrilling encounter.

Spain continued to put the pressure on at the top of the table by beating Thailand Green and Argentina proved to be the team to beat, after winning against Brazil.

The league is taking shape and it looks to be an exciting final with only two more weeks remaining.

Head Coach PSS Martin Hill commented after the game: “This league is community based and is a social event on Sunday at BIS.The teams are well-balanced and the new bonus point system is working well. With just two weeks left, the league tables are starting to take shape with all teams looking for more points.”