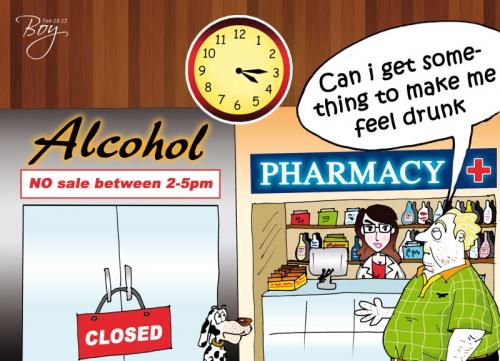 PHUKET: The recent fining of a pharmacy owner in Chalong Police District (story here) for the illegal sale of prescription drugs is just the tip of an iceberg that needs to be urgently addressed by the Ministry of Public Health (MoPH) and law enforcement agencies in Phuket.

The year 2012 was the first ever that death by overdose of prescription drugs surpassed the death toll by illegal narcotics in the United States, addiction specialist Dr Drew Pinsky said in a recent episode of the acclaimed Adam Carolla podcast.

Sadly, the situation in Thailand – and Phuket in particular – is probably worse, even if few MoPH officials would be willing to admit it. Along with its reputation for sea, sun, sand and nightlife, our island has also developed a reputation internationally as a free and easy source of a mind-bending array of pharmaceutical products, many of which would be difficult or impossible to obtain in most western countries without a doctor’s prescription.

Let there be no mistake: we are all blessed to live in an age in which advances in medical science allow us to live longer, happier and more healthy lives than our ancestors could ever have imagined. The downside to this is the needlessly dangerous overprescription and undisciplined distribution of pharmaceutical drugs by doctors and pharmacy staff for financial reasons. In addition to a body, prescription drugs are now often found in hotel room crimes scenes.

While the exact causes of many of these individuals’ deaths are not publicly confirmed, the surrounding circumstances are trending: lifeless remains found in a room along with empty alcohol bottles and an unspecified quantity of what is usually described only as “prescription medication”.

What those drugs are usually remains a topic of conjecture, but there are plenty of possible candidates: from strong synthetic opioid painkillers like Tramadol to psychoactive drugs like Alprazolam, which when taken with alcohol can become a lethal cocktail. Another prescription drug which is commonly found at such scenes is Viagra, which despite being a prescription drug is readily available over the counter in many parts of the island.

The illegal, over-the-counter sale of these and other potentially dangerous medications by many unscrupulous pharmacy owners on the island should be the primary enforcement focus of local MoPH officials – but it isn’t.

The Phuket Gazette recognizes the outstanding work and dedication of MoPH staff in Phuket, but they need to do more to combat the island’s growing reputation as a pharmaceutical candy store to the world.