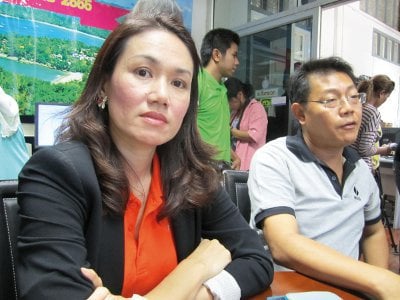 PHUKET: RUMORS that the Pearl of the Andaman will be destroyed in a cataclysmic natural disaster on April 28 have spread like wildfire, and local officials have responded in classic Phuket style: by planning a number of events and parties on that date. The Phuket Gazette’s Chutharat Plerin and Kritsada Mueanhawong report on how it all got this crazy.

PHUKET: Following widespread reports of Phuket’s imminent demise, the mother of Thailand’s most famous transgender celebrity held a press conference last week to deny that she was possessed by spirits so that she can warn people that Phuket was destined to sink into the sea today, April 28.

Such rumors have been most widespread in Srisoonthorn subdistrict, beneath which a 4.3 Richter earthquake struck on the afternoon of April 16. The initial jolt was followed by a series of low-intensity tremors that stirred a sense of apprehension among many residents of the area.

The source of the rumor appears to have been a posting on Facebook under the name “Chany Jane”, whose true identity remains unknown.

The information was quick to jump from the internet to a considerably less high-tech media: printed leaflets that were widely distributed in coffee shops and other local businesses in the Srisoonthorn area, which geologists have pinpointed as the center of the tremors.

ACCORDING to initial postings by Chany Jane, the spirits of Phuket’s two famous Heroines Thao Thepkrasattri (Jan) and Thao Srisoonthorn (Mook) channeled spirit mediums to implore the public to vacate Phuket before April 28, at which time the island would be destroyed by some form of natural disaster.

According to Ms Jane’s Facebook posting, Mrs Suwaphat Petcharat was one of two middle-aged women who began “acting strangely” at a well-known private hospital in Phuket on April 16, the same day that the first and largest of the recent quakes to hit Phuket struck.

Nong Poy is Treechada Petcharat, a famous transgender actress and model who is widely credited with having changed stereotypes about transgender people in Thailand. Born male, the native of Phang Nga underwent gender reassignment at age 17, then went on two years later to win the Miss International Queen pageant, the transgender equivalent of Miss Universe, says Wikipedia.

Now 25 years old, Nong Poy has since gone on to a successful show business career and is virtually a household name in Thailand.

Her mother, Mrs Suwaphat, who appeared at the press conference with her husband Akachat Promsri, rejected outright the information posted on Facebook by Chany Jane.

She was never possessed by spirits and wasn’t even at the hospital referenced on the day of her alleged possession, she told reporters.

“THIS is total falsehood. Please do not be fooled by these rumors. On April 16, I was home in the morning, then I met a client at midday and went back home right after that,” Mrs Suwaphat explained to reporters on April 18.

“In the afternoon, my husband and I joined some other friends and went out to have somtam [spicy papaya salad] together. It was one of my friend’s birthday,” she said.

“After I heard about the internet rumor, I called a friend of mine who works at that hospital. Nobody there had a clue about what had been posted,” said Mrs Suwaphat.

“We received many calls from people asking about it. Even our relatives were affected by the rumor because people kept calling them to ask about it.

“I did not post anything online [that day] to stop the spread of the rumor because I was busy,” she explained.

“I never imagined it would spread so quickly and cause so many people to panic,” she said.

However, Mr Akachat said the family had no intention of trying to take legal action against the poster. “We have not considered filing a criminal complaint or anything like that. We do not know the poster. She is just a girl. She had no way of knowing what would ensue after posting those comments,” he said.

Chany Jane is rumored to be a student at a local university with a talent for “creative” writing.

Mrs Suwaphat and her husband Akachat, Nong Poy’s father, said they feared the public might think they were trying to draw attention to themselves.

“We never tell anyone we are Poy’s parents. We have never sought fame in any way,” Mr Akachat said.

“I would like to tell the poster that she does not have to apologize us. What she should do is to apologize to the people of Phuket people for what she has done,” Mrs Suwaphat added.

AFTER officers of Srisoonthorn Municipality heard about the rumor, they checked coffee houses and other small businesses in their jurisdiction and found the flyers disseminating the doomsday claims.

The officials paid a visit to the Bang Mad Coffee Shop in Village 8, where they found many local villagers engaged in animated discussions about the leaflets. Some were in a state of panic, others dismissed the rumors out of hand – some people did not know what to make of them.

One of the flyers appears to have been based on Chany Jane’s post. The other contained similar warnings, allegedly sourced to the bodhisattava Mae Guanyin, some time last year. The flyers did not specify how Guanyin, venerated for her compassion, relayed her warning to the world of the unenlightened.

“I have heard that there are many warning leaflets at grocery stores and coffee shops, so I decided to go visit local residents with my team. I found that many people were panicked by these warnings,” said Srisoonthorn Mayor Worawut Songyot.

The mention of the highly-revered Phuket heroines and the fact that the subterranean rumblings had persisted were both factors ratcheting up tension among the locals, he said.

He tried to explain the situation to local residents in a matter-of-fact way and encouraged them to follow only information released through official channels. Many people who heard the rumors were not taken in by them, he added.

SOMSAK Kapapana, owner of the Bang Mad Coffee Shop and also assistant village headman of Srisoonthorn Village 8, told the Gazette, “A person came in and gave me the two leaflets, so I kept them at my shop. Many people came to read them. Some were terrified by the information; others refused to believe it.

“Many elderly women panicked after reading it, especially the references to Mook and Jan, the two heroines worshiped by many villagers,” he said, adding that he didn’t believe the rumors.

Phuket Vice Governor Chamroen Tipayapongtada also advised people to check the source of any news and to trust information released by the government.

“No matter what happen, we can guarantee that we will be there to inform you if something goes wrong,” he said.

Phuket rolls on into ‘Doomsday Saturday’