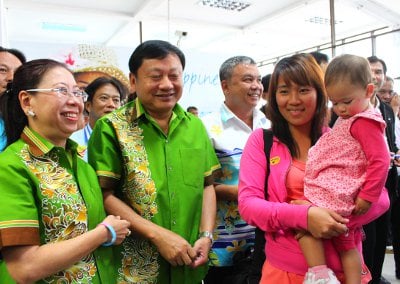 PHUKET: The mass exodus from Phuket predicated by some failed to materialize today as police at the Tah Chat Chai checkpoint reported normal Saturday morning traffic on Srisoonthorn Bridge, which links outbound traffic to the mainland.

Meanwhile, as part of the Provincial government’s efforts to boost confidence that today will not be a one of calamity, as rumors have predicted, a host of high-profile officials were at Phuket International Airport this morning to welcome the first inbound flight of the day.

Officials wearing their best similes handed out garlands of flowers and gift key rings to the slightly surprised arriving passengers.

Speaking at the airport, Governor Tri explained that he had been told by Suwit Kosuwan, chief of the Mineral Resources Department’s Active Fault Research Division, that for Phuket to disappear into the sea would require an earthquake measuring 20 on the Richter scale to strike the center of Phuket.

Gov Tri went on to explain that Mr Suwit said that the worst that could ever possibly occur is a 9.0 Richter earthquake.

“People should not panic because of one rumor,” he said.

“People who love Phuket should be confident today and ignore rumors of Phuket sinking into the sea,” he added.

Airport Director Prathuang Sornkham, who arrived with the flight from Bangkok, said, “Yesterday, compared with April 27 last year, shows a passenger increase of 10.3 per cent. All flights are full. Certainly none of the 18,000 Chinese from Amway canceled.”

“This proves that people still have confidence in our safety measures and they are not listening to rumors,” he added.

FC Phuket hoping for a big catch in Sri Racha