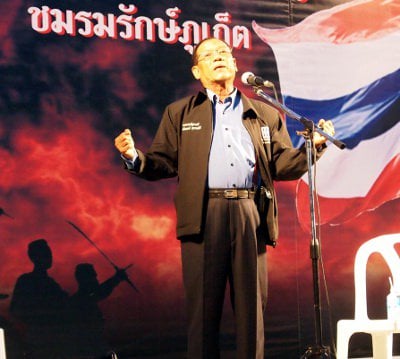 PHUKET: Democrat Party members staged a protest in Phuket on Friday to denounce the reconciliation bills set to be discussed in Parliament. The gathering made Phuket the first province to rally against the bill, said Democrat MP Sathit Wongnongtoey.

Over 2,000 joined the rally at Queen Sirikit Park in Phuket Town, led by veteran MP Anchalee Vanich Thepabutr and MP Raywat Areerob. Also attending were Trairong Suwankiri and Suthep Thaugsuban, both Cabinet members in the government of Abhist Vejjajiva.

The rally was designed to put pressure on the Pheu Thai government to shelve the reconciliation bills, which Democrats and other opposition groups recognize as a strategy for clearing fugitive former prime minister Thaksin Shinawatra of crimes he was convicted of while in office.

“Phuket is the first province to throw its weight against the reconciliation bills,” said MP Sathit.

“Songkhla and Rayong have joined Phuket,” he said.

The protesters claim that the Pheu Thai Party-led government has made every possible attempt to have Mr Thaksin acquitted and the 46 billion baht seized from him returned.

“The bill is written with the intention of clearing Mr Thaksin of all wrongdoing. When the bill is passed he will be cleared of everything, and so will his close followers who burnt down the provincial halls around the nation,” exclaimed Mr Trairong.

MP Anchalee and MP Raywat both took to the stage at the rally and spoke about yellow-shirted members of the People’s Alliance for Democracy (PAD) blocking Pheu Thai MPs from entering parliament on Friday in hopes of postponing the tabling of the bills.

“The passing of any of the [reconciliation] bills would be disastrous for Thailand,” said MP Anchalee.

“Jatuporn Prompan [core leader of the National United Front of the red shirted Democracy Against Dictatorship, or UDD] is urging red shirts to go back to Bangkok. I believe he wants to create a mob versus mob conflict,” she explained.

“We will have to see how Prime Minister Yingluck Shinawatra will manage this situation,” she added.

On stage, Mr Suthep told the crowd that the government had failed to listen to the people and do its job, so now the Democratic Party had to step up.

“We will do anything possible to stop the bills. We cannot let the bills be passed; it will destroy the judiciary system,” Mr Suthep said.

“We must go to Bangkok to show [the government] that we will not accept the reconciliation bills,” added Mr Trairong.

Phuket banks another gold in the games