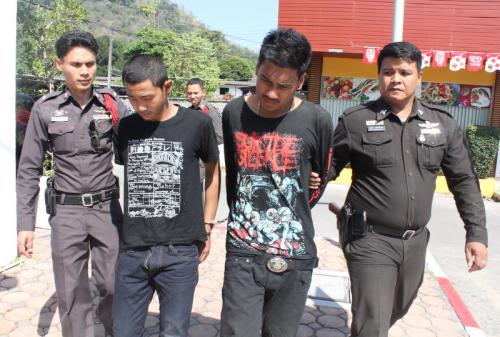 PHUKET: Two men arrested on Thursday for brandishing a firearm at Phuket City Police officers and attempting to flee the scene were not charged for attempted murder.

Tinnakorn Suwan, 21, reported the duo to police after a violent argument broke out between the three men earlier that morning.

“Mr Tinnakorn’s ex-girlfriend had asked her friends, Mr Weerasak and Mr Chaiyuth, to protect her later that day when she moved out of Mr Tinnakorn’s room near Soi Phaniang,” Lt Col Chao Phomna of the Phuket City Police explained.

“After the argument, the men warned Mr Tinnakorn that hey would be back.”

When Mr Weerasak and Mr Chaiyuth arrived, officers approached the pair and asked to search them.

“Mr Weerasak then pulled the gun on the officers and the suspects took off,” Col Chao said.

Police followed the men to a nearby pond where officers found two motorbikes parked next to two pairs of flip flops, a handgun and a single red shotgun shell.

“We assumed they swam for it, so we scoured the pond. Eventually, we found the suspects hiding in some trees near the water’s edge. Mr Weerasak confessed to holding the gun, but claimed that it belonged to Mr Chaiyuth,” said Col Chao.

Mr Weerasak and Mr Chaiyuth were both charged for illegal possession of a firearm and ammunition, but were not charged with attempted murder, said Col Chao.