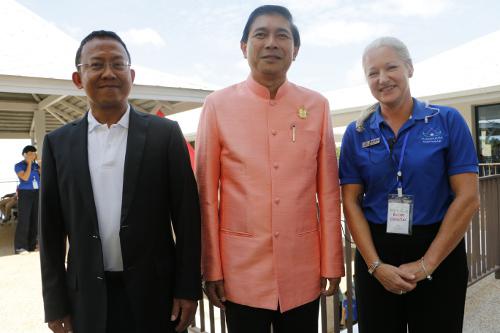 PHUKET: Thailand and Hong Kong are now tied, one win each, following the opening matches of the Davis Cup (Asia/Oceania region group 2) at Thanyapura yesterday.

However, Thailand’s players redeemed themselves in the second round when Wishaya Trongcharoenchaikul (ranked number 915 in the world for singles) downed Ognian Kolev in three close sets (6-4, 7-5, 7-5).

The action continues this afternoon at Thanyapura with a much anticipated doubles match in which Thailand’s Purchiya Isarow and Nuttanon Kadchapanan will face Hong Kong’s Phillip King and Ognian Kolev.

The tournament will wrap up tomorrow with two more singles matches – starting at 10am and expected to conclude by 4pm.

The two winners from Friday, Mr Wishaya and Mr King, will step onto the court in the finals, and Friday’s losers, Mr Warit and Mr Kolev, will also battle it out.

For schedule and live results, click here and here