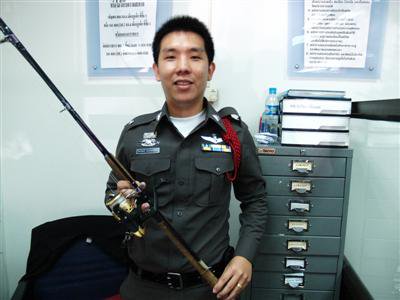 PHUKET CITY: A 26-year-old man faces up to three years in prison after being caught fishing in a public park.

When he arrived at the main pond in Rama IX Park (Suan Luang) in Phuket City, Mr Khomsan baited his hook with a snake head, cast out his line and waited for a nibble.

After reeling in two catfish, Mr Khomsan was spotted by a Phuket City Police officer and three municipality workers who were on patrol in the park.

Mr Khomsan was promptly arrested, his two fishing rods, two catfish and two snake heads seized as evidence by police. He has since been charged with theft of public property.

Pol Sub-Lt Teerawat Amnachjaroenying told the Gazette that Mr Khomsan claimed he did not know it was illegal to fish in the park and that he was fishing for food for his family.

His wife told the Gazette that her husband lived behind Suan Luang his entire life and had always fished at the lake.

But Sub-Lt Teerawat said the fish belong to Phuket City Municipality and that stealing them is punishable by up to three years in prison and a 6,000 baht fine.

“His sentence could be suspended and he may only be fined 1,000 or 2,000 baht because he confessed to the charge,” Sub-Lt Teerawat said.

This is not the first time the main pond in Suan Luang Park has been the site of controversy.

Two days prior to Mr Khomsan’s arrest, a man was gunned down in an intense shootout with police at the site. His body was floating in the lake for over an hour before it was recovered.

In August last year, four fishermen were arrested for using chemicals in the same pond to poison at least 80 kilos of fish.

Motorbike in Phuket pond: one dead, one injured