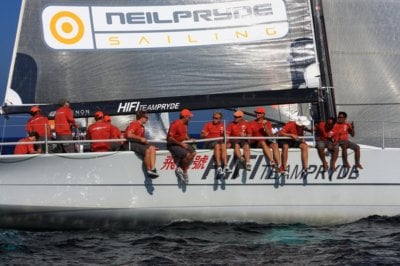 PHUKET: The crew of Royal Thai Navy 1 celebrated the 82nd birthday of His Majesty King Bhumibol Adulyadej in style today, winning two races out of two on the final day to become the only Thai crew to taste victory at the 2009 King’s Cup.

At the start of the day, which the entire fleet marked with a sail past in honor of His Majesty The King, Royal Thai Navy 1, skippered by CPO.3 Wiwat Poonpat, was a point behind Peter Dyer’s Team Bentley in the IRC 2 class.

The Thai boat secured a fifth consecutive first-place finish to claim victory and the series.

Neil Pryde and Hi Fi were all but assured of victory in the Racing class at the start of the day. A second-place finish in the opening race made the series secure and ensured the crew had the luxury of watching the final race from the shore.

Asian Yachting Grand Prix rival Ray Roberts made a disappointing start to the regatta on Evolution Racing but back-to-back wins on the final day were enough to ensure a top-three finish.

Fergus Wilmer and Henry Kaye’s Thor continued their record of winning every single race in the Multihull Class, although David Liddell on Miss Saigon was only 10 seconds off the pace in the day’s first race.

A third-place finish in the opening race was good enough for Brent Gribble’s Twin Sharks to win the Firefly 850 series while Anthony Hasting’s Baby Tonga Hideaway Club won the only race of the day – and with it the series in the Premier Class.

Race organizer Simon James declared the 2009 Phuket King’s Cup a success: “It went really well. It was good to see such a big fleet, and the racing has been some of the most competitive ever, with finishing times separated by a mere second in a number of fleets.”