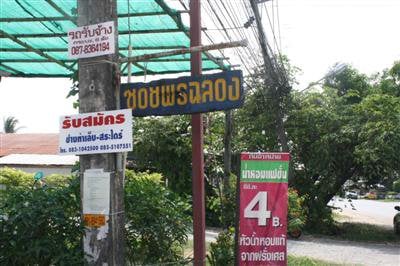 CHALONG, PHUKET: A woman drowned after crashing her salaeng (motorbike with illegal side-car) into a tin mining pond on Wednesday evening.

The victim’s grand-daughter was also seriously injured in the crash.

Another passenger, whose age and gender were not reported, escaped unharmed.

Witnesses reported that at around 7:30pm, 56-year-old Wanna Rachathanarak lost control of the vehicle, which slid into a pond located off Soi Phon Chalong in Chalong Village 9.

The dirt lane is best known as the access road to the Ao Chalong Yacht Club (ACYC).

Bystanders rushed to pull Mrs Wanna and her two passengers from the pond.

The two were rushed to Vachira Phuket Hospital by rescue workers from the Tourist Rescue Center at Chalong Pier.

Vachira’s doctors were unable to save Mrs Wanna. Her grand-daughter remains in serious condition.

As modified vehicles, all salaeng in Thailand are illegal. Traffic police seldom enforce the law because the vehicles are the only means of transport that low-income workers can afford.

Because of this, salaeng operate without ever having to pass any sort of inspection regime.

Typically ‘unroadworthy’ and poorly balanced, they are involved in many accidents in Phuket every year.

The worst in recent years was a November 2008 bus crash on Thepkrasattri Rd in Mai Khao that killed two and left 30 injured.

Witnesses to that crash told police that it occurred when a salaeng driving against the traffic suddenly veered into the path of the oncoming bus.