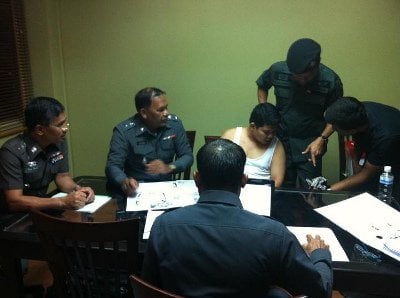 PHUKET: Police late this afternoon arrested Anusit Kaewmookda, the man wanted for the armed robbery of a Kasikornbank (KBank) branch north of Phuket Town on Wednesday.

A reported 2.7 million baht was stolen in the heist.

Police moved in and made the arrest soon after 5pm at an apartment behind Surakul Stadium where Mr Anusit was in hiding with one of his ex-girlfriends.

“Police tracked him by his mobile signal. Once he turned his mobile phone on, we knew where he was hiding and moved in to make the arrest,” Phuket Provincial Police commander Choti Chavaviwat told the Phuket Gazette.

Once police had Mr Anusit in custody, officers took him directly to Phuket City Police Station, where he confessed to the robbery in front of police and members of the press.

“I was the one who robbed KBank on Wednesday. I hid 2.5 million baht in my rental house in Koh Kaew,” Mr Anusit said.

“I took some of the money with me to buy 3 bahtweight of gold [valued at about 75,900 baht]. I also bought some new clothes and paid for the rented room to hide in before I was arrested,” he added.

Maj Gen Choti agreed with the assertion revealed by Phuket City Police Superintendent Sermphan Sirikong yesterday that the robbery on Wednesday may not be Mr Anusit’s first.

“Police have yet to finalize their investigation, but at this stage it seems likely that he is also the man who robbed the KBank branch at at the Tesco Lotus Chaofa shopping complex in Wichit on January 29 this year,” he said.

“At that time the suspect got away with 649,000 baht. However, police need to continue their investigation into this,” Maj Gen Choti added.