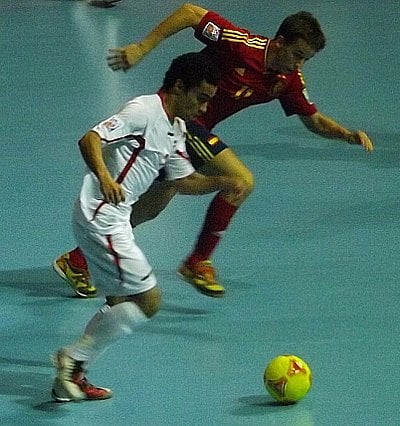 BANGKOK: A total of 31 goals were scored in four high-intensity, memorable matches taking place on day 2 of the FIFA Futsal World Cup Thailand.

The ‘soccer clinic’ was to the pleasure of a handful of Italian fans, in addition to many Thai supporters in attendance, and yet to the dismay of a large, yellow and green clad Socceroo contingent.

Italy’s nine goals were scored by eight different players – a testimony to how diverse the side’s arsenal of talent is.

Australia’s consolation goal – the final of the match – was scored by Danny Ngaluaffe.

The second match of the group followed shortly after, and featured world no 6 Argentina pitted against world no 37 Mexico.

To little surprise, the Argentinians had no trouble with the Mexicans, and the 5-1 scoreline in favor of the South Americans repelled any doubts about who was the better side.

At the same time of that match, Morocco and Panama opened up their Group B match across the capital at Huamark Indoor Stadium.

Though the Moroccans took a 3-1 lead in the first half, Panama woke up and came back to score seven unanswered goals in the second half to win 8-3.

Concluding the night was a thrilling Group B showdown between world no 1 Spain and no 7 Iran.

Without question, the match was the most intense and thrilling all evening, despite yielding the least amount of goals.

The two favorites of the group demonstrated the highest standard of futsal seen so far in this year’s championship.

Played in front of a near capacity crowd, which was slightly dominated by an energetic and vocal Iranian contingent, the match’s first half saw Spain take control with two goals scored by Miguelin and Lozano.

Iran came out of the locker rooms revitalized and managed to equalize with goals by Masoud Daneshvar and Hossein Tayebi.

Despite nail-biting counter-attacks by both sides in the roller-coaster final moments, neither side was unable to break the deadlock, and were left content to share the points at the final whistle.

The result keeps Panama at the top of Group B, though it is doubtful that the Central Americans will be able to maintain such prestige for long.

Four matches scheduled for today include the openers for Group E and F as follows:

Group E matches will be played at Huamark Indoor Stadium in East Bangkok as follows:

Group F matches will be played at Nimibutr Stadium:

Sunday evening (November 5), Groups A and C will enter their second round of matches.

Group A will feature two matches at Huamark Indoor Stadium

Steven Layne will continue his live coverage from Bangkok for the Phuket Gazette.