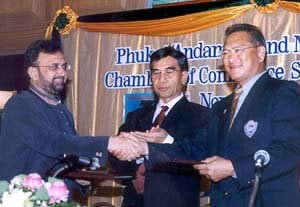 KATA: The Phuket Chamber of Commerce has signed a memorandum of understanding to develop trade links with its counterpart from the Andaman and Nicobar Islands, the Andaman Chamber of Commerce and Industry. The agreement is supported by the two associations’ respective governments, but comes over objections by some Port Blair-based NGOs that fear improved links could introduce social vices to their community. The signing ceremony, held yesterday at the Kata Beach Resort, was attended by Phuket Governor Udomsak Usawarangkura; Pamuke Achariyachai, Chairman of the Phuket Chamber of Commerce; Mohamed Jadwet, President of the Andaman Chamber of Commerce and Industry; J. R. Sharma, First Secretary of the Commercial Embassy of India in Bangkok, and a delegation of about 100 businessmen from the Andaman islands. Mr Jadwet told the Gazette that, at just 450 kilometers from Port Blair, Phuket is the Andamans’ closest neighbor and that both sides stood to benefit from increased trade. “We are looking for cooperation with Phuket in the tourism, fishery and agricultural sectors,” Mr Jadwet explained, adding that he hoped Phuket would serve as a gateway through which the Andamans could develop tourism and sell seafood. He added that the Andamans could also benefit from Thai expertise and investment in agriculture. He explained that a number of basic commodities currently being shipped in from the Indian mainland, such as cement, could be sourced more cheaply in Phuket because of lower production and transport costs. In reference to NGOs that oppose linkage because they fear it will lead to sex tourism, Mr Jadwet said that such fears were unreasonable because these elements of the Phuket tourism industry were not supported or promoted by the Phuket Government. “We are looking at the good points of Phuket,” he stressed. Gov Udomsak said the memorandum was a step in the right direction and fitted in nicely with plans to develop Phuket, Phang Nga and Krabi jointly as a “strategic cluster” through marine-based tourism. “They have beautiful natural scenery and good agriculture and fishing industries,” said the Governor, adding that the introduction of direct flights between Port Blair and Bangkok, expected to begin soon, would be mutually beneficial and further facilitate trade. Gov Udomsak said that he expects a contingent of Phuket businessmen to visit the Andamans soon to explore investment opportunities there.