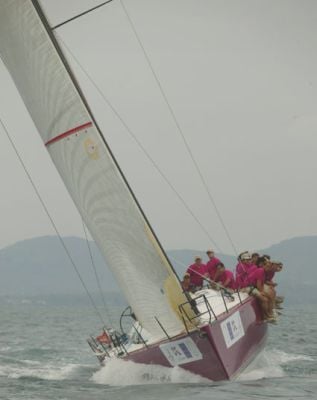 PHUKET: The first race in the 17th Phuket King’s Cup Regatta started with good winds gusting up to 15 knots when the action got underway off Kata Beach today. Under overcast skies with some rain the night before, racing started in good winds which hung around during the early afternoon instead of dropping off early, as in past regattas. Race organizers nevertheless shortened courses in case the wind started to drop, in order to give competitors a good chance of finishing. In the hotly-contested Racing Class, the elegant Italian-owned Plis Play was first across the line, helped along by some expert crew with America’s Cup experience. However, after handicaps were taken into consideration, Plis Play was relegated to third place in the provisional results. First place went to Yo!, skippered by last year’s King’s Cup winner Peter Ahern. Second was Hi-Fidelity with King’s Cup regular Neil Pryde at the helm. Ray Ordoveza’s Clariden-Karakoa was 4th, and Fred Kinmonth’s Stella-Minter Ellison scored 5th place. The locally-made Phuket 8 attracted attention in the Sports/Racing Class, its first King’s Cup outing. Securicor Somtam Express, sailed by Scott Duncanson, finished 3rd behind Jeremy Muller’s Scallywag and Stuart Harrison’s Panic!. In the Premier Cruising Class, King’s Cup veteran Big Buzzard took the honours for skipper George Olivet, with John Wardill’s Australian Maid a close second and Marcel Liedts’ Hocus Pocus 2 finishing third. Hong Kong-registered Ruby Tuesday won the IRC 1 Class. Finishing second was David Lindhal’s La Samudra, followed by Rob Williams’ Di Hard. The IRC 2 Class was won by Royal Thai Navy 1, which just pipped Royal Thai Navy 2 over the line. The Malaysian-registered Dewi Bayu Gotcha Lagi, with Juanita Spencer at the helm, finished third. In the IRC 3 Class, Tracy Williams took provisional honours aboard Patrice III, followed by Bob Ashman’s Simba and Graham Lind’s Sumatra. In the slower but more comfortable Ocean Rover Class, Ray Bradshaw’s Gladys Guttenburg took provisional honours, followed by John Fenn’s The Four Winds and George M Johannes’ Ok-La. In the Classic Class, which features some of the most beautiful boats in Thai waters, Long White Cloud skippered by Stephen Pepperell took provisional honours. Julian Hill was second on Sanook and Marc Massari’s Sylvia finished third. Meanwhile, in the Ocean Multihull Class, King’s Cup regular and regatta stalwart Radab Kanjanavit finished second on Cedar Swan, beaten for provisional honours by Mark Pescott aboard Cyrene. Fine Pitch with Phil Atkinson at the helm finished a close third.