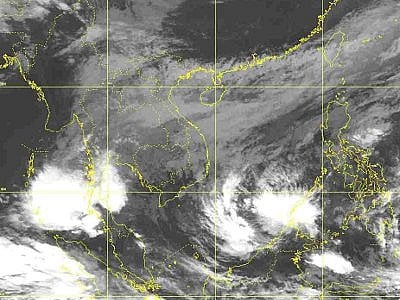 PHUKET: Phuket Airport remains open today despite winds gusting to more than 30 kilometers per hour and a flood warning issued early this morning.

“A low pressure [system] is covering the middle of southern Thailand. Torrential rain with heavy to very heavy fall in many areas remains over the south,” read the warning issued this morning by the Thai Meteorological Department.

Waves rising to two to three meters high remain in the Gulf of Thailand.

All ships were warned to proceed with caution and small boats are advised to keep ashore for the next few days.

The low-pressure system will move to the Andaman Sea and the Bay of Bengal tomorrow and Wednesday, the report said.

Travellers in Surat Thani are reporting crowding at the airport terminal following flight delays and cancellations there, while State news agency MCOT reports that Nakohn Sri Thammarat Airport has been closed indefinitely following flooding of the runways with up to 50 centimeters of water.

Nisit Sombat, airport director Nakohn Sri Thammarat, said this was the first time the facility had been forced to close due to flooding.

“The airport’s entrances are under a meter of water, and after the water recedes a team of engineers will conduct a survey to check the safety of the runways and the related electrical signal systems,” said the report.

Teera Aiedduo of the Nok Air cargo division at Nakhon Sri Thammarat Airport told the Phuket Gazette that critical systems had been damaged.

“The airport is still closed, but the floodwater is receding,” he said.

“Taxiways have been damaged and power supply at the airport has also been disrupted,” he added.

“The runway landing lights have also been damaged and we’re waiting on an Airports of Thailand maintenance crew to arrive to carry out repairs,” he said.